CPB TO PACIFICA: “YOU ARE OVER GOVERNED & FISCALLY IRRESPONSIBLE” • KCLU SETS THE PACE WEST OF LA

At the January 31, 2019, meeting of the Pacifica Foundation’s National Board, Executive Director Maxie Jackson centered in on the core problems as the organization fights for survival.

After speaking with representatives of the Corporation for Public Broadcasting (CPB), Jackson told the board via a conference call, that Pacifica must change its system of governance.

In an audio recording of the meeting, obtained from a reliable source, Jackson debriefed the national board about the reasons CPB will not currently provide funds to the Pacifica Foundation:

Jackson: “Pacifica is over governed. That there is too much governing structure involved. I think everyone on this call knows the exorbitant amount of money for these elections.”

The elections Jackson was referring to are at the heart of Pacifica’s governance system. Members elect other members to serve on committees that make decisions big and small. Most of the people that are chosen have no experience in the operation of radio stations or the creation of programming. But they do have opinions – lot’s of them.

Jackson addressed the disconnect between the governing members and the folks who operate the stations:

Jackson: The tragedy is that, when I go around to the stations and talk with the staff, I have yet to meet a person who says the board serves them in any way that is productive.

In other words, the mind-numbing number of internal committees have created a situation where the people who actually “make radio happen” are micromanaged to the point of where creativity is impossible.

An even bigger problem, according to Jackson, is that the governance system causes a lack of fiduciary responsibility that has put Pacifica’s future in peril:

Jackson: “One thing that is abundantly clear is that we have a lack of skilled and qualified personnel in many of our shops handling business management. It is not a secret, it is evident when we are trying to put audits together. The fact that there haven’t been audits for four or five years [from some Pacifica stations] is an indication that the local station boards lack fiduciary responsibility, and that the national board lacks its fiduciary responsibility by not insisting on those reports and getting them.”
Jackson reminded the national board that Pacifica lost CPB support in 2012 because of their lack of transparency and accountability:

Jackson: We have a track record of poor financial management at the station level. If you go and look at the CPB documents as far back as 2012 [it] is really clear in the report is that all five stations mismanaged their reporting of their finances.

Jackson recommends that Pacifica change its governance system from top the bottom. Specifically, CPB’s advises that Pacifica change all of the internal committees into advisory groups, not governing units as they are now. Then, reorganize and increase the decision making power of the national board.

Jackson: “Our board…should be [a place] that you bring time, talent and treasure to the organization. What is most important is talent – that we can have people on the board who are an asset to the stations.”

This will likely be a tough pill for many Pacifica members to swallow. Several members of the current national board attended the meeting “under protest.” They like current "illusion of democracy" that empowers people like them to become mindless knit-pickers who enjoy screwing things up for the fun of it.

KEN SAYS: We are truly impressed with Jackson’s analysis of the situation and actions he is recommending. For the good of radio, we hope he succeeds.

KCLU LEADS ALL OTHER NONCOMMERCIAL STATIONS IN FALL 2018 NIELSEN RATINGS 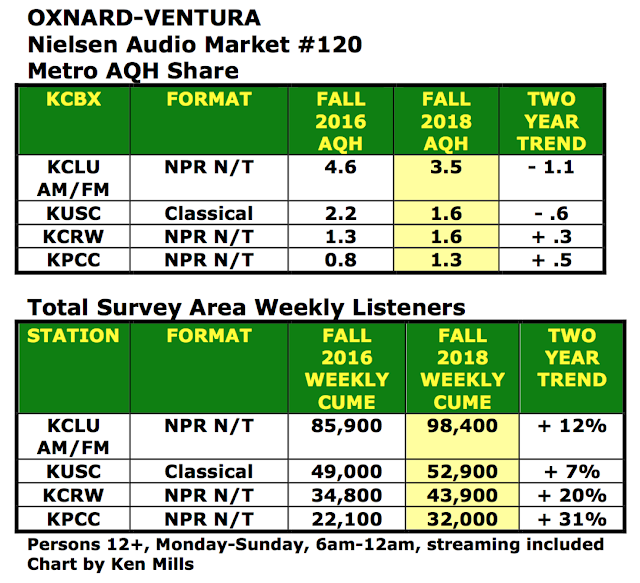 Duncan Lively, Director of Programming at KCLU based in Thousand Oaks, California, has a tough assignment: Compete and win in two markets against KCRW and KPCC with a small percentage of their programming budgets.

In the Fall 2018 Nielsen Audio ratings KCLU has done that again.

According to Nielsen, KCLU has more AQH listening and weekly listeners in Oxnard-Ventura and Santa Barbara than the competition from LA.

KCRW and KPCC (plus Classical KUSC) have full-power repeaters in both markets. But, KCLU is the top station in these two exurban markets.

In Oxnard-Ventura, the bigger of the two cities, KCLU had 98,400 estimated weekly listeners, up 12% from Fall 2016. KCLU fell a bit in AQH share, but still leads KCRW and KPCC combined. 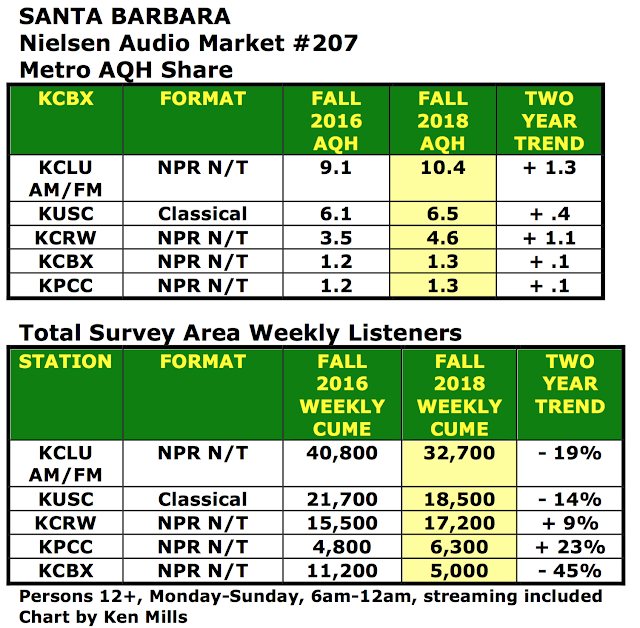 It was a similar victory in next-door Santa Barbara. KCLU increased it AQH share to 10.4%, up from 9.3% in Fall 2016. KCLU’s estimated weekly listeners were down 19% but KCLU beat three NPR News/Talk competitors.

2018 has been a challenging year for KCLU and residents of the two communities. Terrible wild fires scorched portions of the beautiful landscape and took-out one of KCLU’s translators. The fires may have done considerable damage but the spirit of residents and the station are stronger than ever.