TO UNDERSTAND CPB’s STAKE IN HD RADIO “FOLLOW THE MONEY”


There have been lots of comments about my PubRadio post last week about CPB, iBiquity and HD Radio.  The most interesting reactions have come from NPR station managers and other public radio insiders.  One message – from a senior manager of a major public media entity – had this advice for me:

To understand what is going on with CPB, iBiquity and HD Radio, follow the money.

How much money has CPB invested in HD Radio?  I asked them but they haven’t replied.  Maybe CPB doesn’t even know.

One highly respected station manager, who asked me to keep his name confidential, put it this way:


There have been enormous opportunity costs for HD. CPB's millions might have been better sunk into stimulating journalism. Untold staff hours were wasted on HD - logistics, installation, promotion, programming.
Other station managers told me they used CPB Digital Conversation funds for new analog transmitters, studio upgrades and facility improvements.  HD channels were a second thought.  One manager told me his station uses their HD2 channel to deliver FM programming to their FM translators – The Poor Man’s STL.
RUNNING THE NUMBERS ON CPB's DIGITAL CONVERSION
Until CPB releases their total investment in HD Radio, here is a guesstimate of the cost of the Digital Conversion campaign from public documents:
CPB said in a press release approximately 300 stations participated in HD digital conversation.  The average conversion cost was $130,000.  CPB paid $75,000, or 70% of the project cost. Minority service and hardship cases got more money and a higher percentage.
Lets say CPB spent $75,000 for 200 stations -- $15,000,000
And, lets say CPB spent $85,000 for 100 stations -- $8,500,000
TOTAL: $23,500,000
If these numbers are correct (and I will gladly share CPB’s official numbers when/if they provide it), CPB has invested at least $23,500,000 in the HD campaign.  One communications blogger said it was even more:
To date, the Corporation for Public Broadcasting has given member-stations approximately $50 million in HD Radio “upgrade” grants (some of them of the matching variety).
http://diymedia.net/how-does-ibiquity-stay-afloat/1935

These estimates do not include station investments, licensing fees paid to iBiquity, programming or operating expenses.  As part of the agreement with CPB, stations MUST continue to support their HD channels or pay back the money.

The station manager quoted above added:

Pity the poor stations that are still touting their HD service that no one listens to.  To this day, NPR still exploits station's HD innocence by charging $3,000 / year to run NPR on HD. How many stations flush $3,000 down that rat hole?
All I am asking CPB to do is come clean about the taxpayer cost for HD Radio, admit HD hasn’t panned out the way they hoped and join the effort to embrace a digital radio system that actually serves a meaningful portion the population.
Here is an example from CPB's files of HD installation cost at one station: 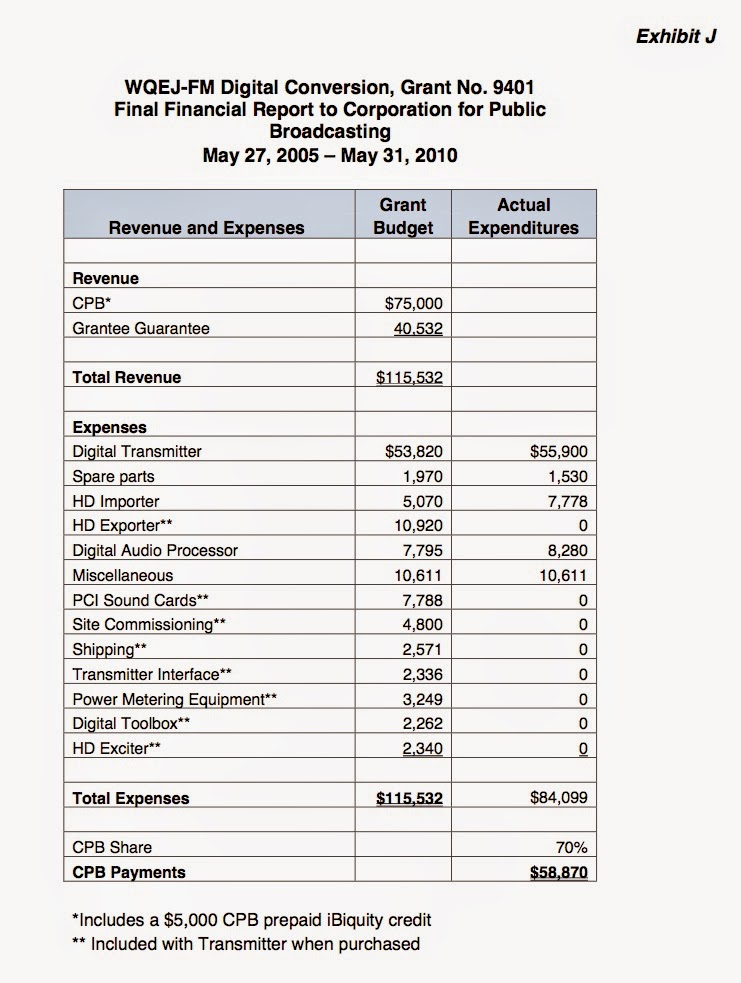