ILLINOIS BUDGET IMPASSE COULD CAUSE MAJOR CUTS AT WSIU • SNAFU IN EUGENE? 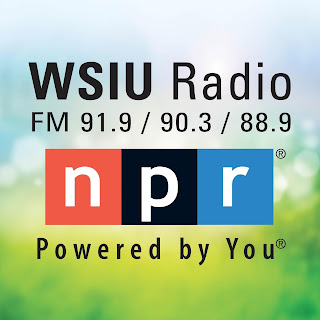 With all of the hoopla about the national election, you might have missed the news about the ongoing budget impasse in the State of Illinois. However, if you work at WSIU in Carbondale, you know all about the mess.

For months Illinois lawmakers have been locked in a staggering budget impasse with no end in sight. Illinois is deeply in debt and there are stacks of unpaid bills. The standoff is a political war between the Democratic-led Legislature and the Republican governor.

At WSIU, CEO Greg Petrowich told the Daily Egyptian newspaper [link]: “The proposed cuts to WSIU would be ‘catastrophic’.”

A budget planning committee has designated WSIU as one of 15 nonacademic centers or initiatives at the university that could cut if state funds don’t arrive by the end of the fiscal year.

WSIU’s budget is about $3.5 million, $879,645 of which came from the state through SIU in fiscal year 2017.  Petrowich said WSIU could lose more than 25 percent of its funding if the legislature doesn’t act soon. Also federal funds are also at risk, because state money is leveraged for federal funds. WSIU could also lose 10% of its CPB funding.

According to disclosure data on WSIU’s website [link], WSIU raises more than $1 million in private revenue: $500,000 from members and $500,000 in underwriting.

Because operating expenses are mainly fixed, Petrowich said, WSIU would likely see layoffs if the state does act and the proposed cuts are implemented.

The deal means Bluegrass Country will continue to be heard on WAMU-HD2.

WCAI continues to do very, very well in the Cape Cod metro.  As the Fall reports come in from RRC, we have been seeing a trend for big market news stations to gain estimated weekly listeners while local news stations show declines. That is not the case on the Cape.

WCAI solidly owns the news market despite full-power repeaters from Boston in their backyard. Its great to see positive growth for Triple A WMVY, a gem of a station. 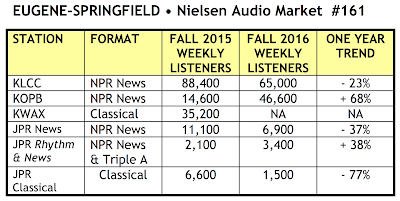 It is hard to take the Nielsen audio estimates seriously for Eugene because they just don’t male sense. Even if there had been a sea change in listening between KLCC and KOPB, these numbers don’t make sense.

I hope stations affected will ask Nielsen and RRC about the in-tab data, etc. Something seems out of sync. Arbitron used to let subscribers see “the mechanical” – actual in-tab diaries – to see the data from its baseline. I did this a couple of times when I worked in commercial broadcasting.

Like Eugene-Springfield, Jefferson Public Radio’s three program channels are a factor in Redding. Best wishes to Beth Lamberson, the new-ish GM at KCHO in Chico.