We’ve written recently about “accidental broadcaster” – licensees who got into the broadcasting business in the 1970s and 1980s when risks were low and money was available. Often these stations are school district licensees. Such is the case in Miami.

Miami-Dade County Public Schools owns WLRN-FM and WLRN-TV, a PBS affiliate. For the past three decades Friends of WLRN, a nonprofit group, has operated the stations with considerable success. Now a power struggle between the district and the nonprofit has erupted over who is responsible for news coverage. If WLRN employees don’t sign the agree, the district said they could face serious but unspecified “consequences.

The Miami Herald reports [link], the district has given Friends of WLRN until March 2nd to submit to a new management agreement that will give the district control of the news product. The district wants to directly employ reporters and editors. People currently doing these jobs will have to reapply to continue working.

The school district said the reason for the change is “student safety.” Currently WLRN news people are not subject to the same background check requirements as district employees. The district’s new agreement will force 19 WLRN reporters and editors to reapply for jobs and become district employees.

This is important, schools district officials say, because student interns work with WLRN employees. Without stringent drug tests and criminal background checks, WLRN staffers could potentially endanger the interns. According to the Miami Herald, the district has suspended the intern program until the proposed plan is completed.

Critics have pointed out that school administrators will have the sole power to hire and fire its journalists. This will put independent news reporting at risk. Observers point out that under the proposed new agreement the school district can also dictate programming and broadcast content. School district officials have downplayed concerns about the plan.

Friends of WLRN defends its track record and warned that the new agreement could turn WLRN into public relations operation. The agreement could also lead to the cancellation of a news partnership with the Miami Herald and cuts in funding from foundations that insist on firm firewalls between licensee management and reporters. 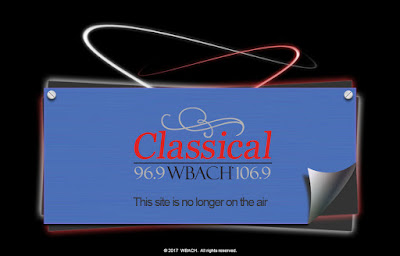 Classical music fans in the Portland, Maine, area had quite a surprise this past Saturday 2/18 when WBQX a/k/a W-Bach, suddenly changed its format to Country music.

Since 1991 W-Bach had provided Classical music to listeners in southern and mid coast Maine. A message on the W-Bach website Monday morning said “this site is no longer on the air.”

According to the Bangor Daily News [link], former W-Bach program coordinator Scott Hooper said in an email to listeners a few hours after the change:

“W-BACH died today. I’m sorry that things went this way. We gave it one heck of a ride, and I hoped for a better outcome.”

The Daily News report says it was well known that W-Bach had been having financial difficulties. Binnie Media, licensee of the commercial station, changed the formats of several of its stations at the same time.

WBXQ was one of a handful of commercial Classical music stations in the nation. According to the Daily News, the emergence of Maine Public Broadcasting’s Classical network was a major factor in the decision to end W-Bach.