This week we have been covering results from the Nielsen Audio February PPM ratings.  Today we take a look at the eight-month trends in estimated weekly listeners for the 20 stations with the largest weekly audiences. 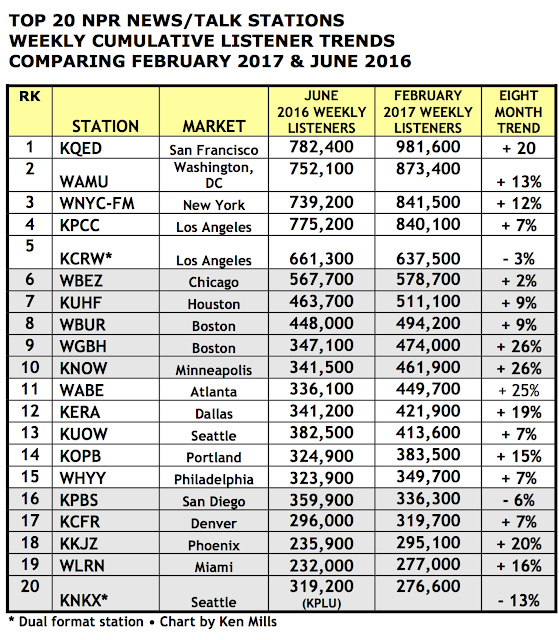 We chose to compare the most recent data with June 2016 data because then the election cycle was beginning to enter its final phase.

Listening to NPR News/Talk stations is at or near record highs. Half of the stations have had increases of estimated weekly listeners of 10% or more in the past eight months. The biggest numeric gain was at KQED, up by almost 200,000 listeners. The biggest percentage gainers were WGBH and KNOW, both up 26%.

JOYCE MACDONALD IS THE NEW CEO OF GREATER PUBLIC

The best new hire of the week has got to be Greater Public’s choice for CEO, Joyce MacDonald.  Joyce has an encyclopedic knowledge of the public radio system and is respected for her advocacy of healthy stations. She replaces Doug Eichten who is retiring in July.

MacDonald has 35 years of experience in media and marketing. She was Director of Station Relations and VP of Member and Audience Partnership at NPR. MacDonald was interim President and CEO of National Public Media, the organization that represents PBS, NPR and stations with national advertisers. Most recently she was VP of Journalism and Senior Advisor for Content Operations at CPB.

KEN SAYS: What a terrific choice. I first bonded with Joyce when she started in 1999 at NPR. Like me, Joyce came to public broadcasting after working in commercial radio. She was VP of Sony Corporation's SW Networks and worked for several years in affiliate marketing for ABC Radio Networks.

I recall hilarious conversations with Joyce about bizarre events we both witnessed at commercial radio conferences by big shot commercial folks like Randy Michaels and Lee Abrams.

KLCC, Eugene, GM John Stark has posted a job opening for a Major Gifts specialist. This is a new position in one of best college towns in America. I was a consultant for KLCC five years ago and if I was at a different point in my career, this a place I’d like to work.

KLCC is looking for an experienced pro who to secure major gifts, planned giving, and grants. The deadline for applications is April 17th. More information is here.

Steve Curtis, a Denver talk show personality who often complained on-air about voter fraud, has been charged with voter fraud himself. Curtis hosts Wake Up!, a weekday conservative gabfest on KLZ-AM. He is also the former Chair of the Colorado Republican Party.

On Tuesday (3/21) Curtis was charged with misdemeanor voter fraud and forgery in Weld County District Court. According to news reports, Curtis allegedly filled out and mailed a ballot in his ex-wife's name in the November election. Authorities said that Curtis’ ex-wife, Kelly, discovered the fraud when she tried to vote in South Carolina.  She then turned him in. A hearing has been set for May.

Ironically, the Denver Post reported that Curtis said on his KLZ show in October:

“There is "something about being a  Democrat that makes people prone to criminal behavior and It seems to me that virtually every case of voter fraud I can remember in my lifetime was committed by Democrats."

When Curtis woke up this morning, I he looked in the mirror and saw a hypocrite.