Wednesday (4/19) was a special day for Minnesota Public Radio (MPR). Not only did MPR honor its founder – Bill Kling-- by putting Kling’s name on their HQ, MPR’s KNOW had perhaps its best performance ever in the Nielsen Audio March PPM estimates.

The new name – Kling Public Media Center – had been in the works since Kling retired as CEO of both MPR and American Public Media.

The actual change was held off until now so that it coincided with MPR's 50th anniversary.

“His entrepreneurial spirit and passion for public service continue to inspire us as we begin our next 50 years. What Bill has done – not just for Minnesota and MPR, but for public media audiences across the country – is unique and lasting. The creativity and innovation within the walls of the Kling Public Media Center will always be a living testament to what Bill began a half century ago.”

KEN SAYS: Bill Kling was public radio’s most consequential change agent. He embraced both sides of public media’s “public/private” partnership.” He brought competition to the noncommercial radio biz when it needed it most.

In 1983, when NPR almost went bankrupt, Kling’s American Public Radio brought a new entrepreneurial spirit, and better programming, to the biz. Some folks called Kling Darth Vader because he pushed public radio to go beyond a subsidized economy.

Public media is better because of Bill Kling’s contributions. Thank you and congratulations! 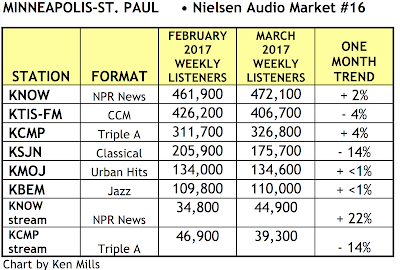 In the March 2017 Nielsen Audio PPM estimates, NPR News station KNOW had perhaps its strongest showing ever.  Not only did KNOW have a weekly cume of almost half a million, it moved to third place in the market in average-quarter-hour share. KNOW’s AQH of 6.5% was topped only by two music-intensive commercial stations.

KCMP aka 89.3 The Current also increased its weekly listeners compared to February.  Today, Friday, April 21st, is the one-year anniversary of Prince’s death. The Current’s coverage of his death and fan reaction became a global moment.

The number of estimated weekly listeners to WAMU declined slightly from the previous month but the station is still number one in AQH share (11.0%). Commercial competitor WTOP had a 9.9& AQH share. 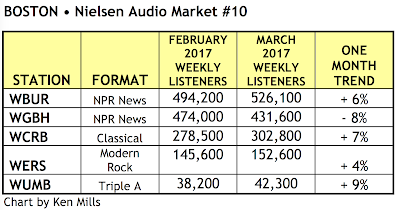 In Boston the seesaw battle between WBUR and WGBH moved slightly in WBUR’s direction with a 6% jump in estimated weekly listeners compared to February. WCRB also posted a nice gain in weekly listeners.

Commercial Triple A station, which shares considerable listening with public radio stations, had 304,800 weekly listeners in the March PPM ratings. 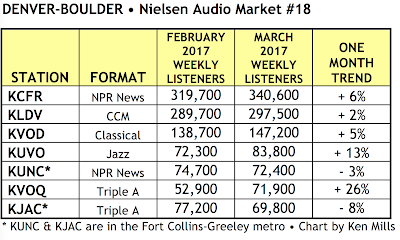 The March book brought good news for Colorado Public Radio (CPR).  All three of its stations were up compared to February.  NPR News KCFR was up 6%, Classical KVOD was up 5% and Triple A OpenAir KVOQ was up an amazing 26% in one month.

Today I am dreaming about becoming General Manager of KJHK, Lawrence, Kansas. Or, more realistically, there is Jayhawk alum reading this post that would be perfect for the job. 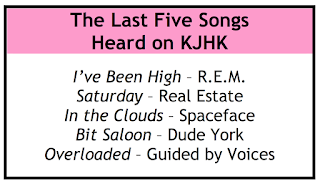 KJHK [link] has been rocking Greater Lawrence since 1975. According to Kaitlin Brennan. a recent KU graduate and KJHK veteran, the station’s sound “has gone from a “grungy-alternative,” counterculture bent to a more varied format, with music, film, news and sports. We’re still edgy, but more mature.” However, KJHK still maintains a “no Nickelback” policy.

KJHK’s studios and offices are located in a state-of-the-art 1,400-square-foot space in the Kansas Union. The station left the journalism department a few years ago and now is fiscally part of the student union. KHJK has an $80,000 annual budget that comes from student fees and underwriting sales.

The job pays around $50,000 a year, enough to have a nice life in Lawrence, a lovely college town. More information is available here.