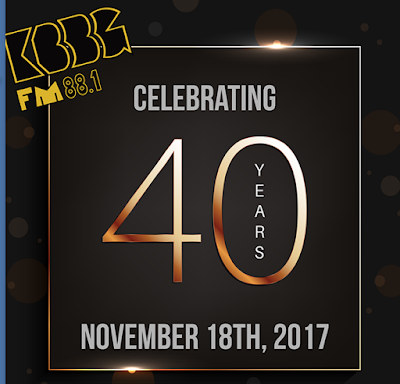 KBBG in Waterloo, Iowa, is a treasure in the Hawkeye state.

For over 40 years KBBQ has been serving the African American community in this metro area of around 160,000 people. The local black population is around 20,000.

African Americans have deep roots in Waterloo. In the early 1900s several thousand black railroad workers settled in the city’s East Side.

In the late 1940s Rath Company, a big meat-packing conglomerate, was trying to keep unions off their turf.  A strike against Rath last 73-days and the National Guard was called in. Cooler heads prevailed.

Jimmie Porter was one of those cooler heads. Porter led the effort to integrate the United Packinghouse Workers of America and United Auto Workers, the two main unions at Rath. Porter formed the anti-discrimination department at Rath in the 1950s.

Porter became a well-known activist and role model in the community.

The station soon became qualified for CPB support. It had a wide variety of news and music through the 1990s. Porter remained active in KBBG’s operations and board until his death in 2007.

During the last few years of Porter’s life dissatisfaction entered the scene.  Porter didn’t like rap music and would not allow it on KBBG. This created a “generation gap” in the community and the station was stuck in a time warp. KBBG languished after Porter’s death.

In 2016 there was a big change in KBBG’s management. Former State Rep. Deborah Berry became General Manager and she brought financial stability and a new sense of purpose to the station. In FY 2016, according to KBBG’s IRS filing, the station’s annual revenue was around $155,000. Members provided around $109,000, underwriting brought in around 24,000 and CPB provided most of the remaining amount.

Oh yes, rap music can now be heard on KBBG.

There are six Nielsen Audio markets in Iowa. Iowa Public Radio (IPR) is a major factor in four of the six metro areas. IPR doesn’t serve the Omaha-Council Bluffs market and Sioux City, in the far northwestern corner of the state, is not part of IPR. KBBG (story above) does not subscribe to the Nielsen ratings. 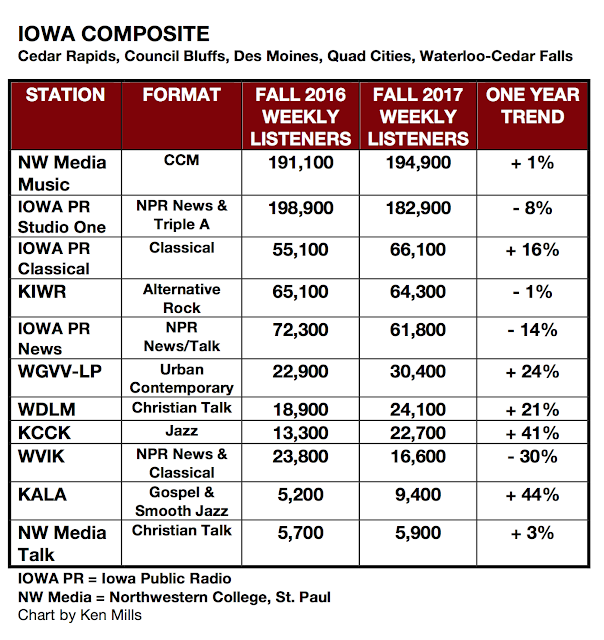 The chart on the left is a composite of data from five Nielsen markets. We have compared the Fall 2017 results with Nielsen data for Fall 2016. IPR [link] has three program channels: 24/7 Classical, 24/7 News/Talk and a dual format service called Studio One that combines NPR’s news magazines with Triple A music.

IPR’s Classical channel was the only one of the three IPR station to have an increase in estimated weekly listeners during the past year.
Other stations had more dramatic and positive growth.

WGVV-LP is perhaps the highest rated LPFM station in the country. We will do a Case Study on them in the near future.

The biggest percentage gains were at KCCK, a feisty independent Jazz station based in Cedar Rapids.

Here are the individual market charts: 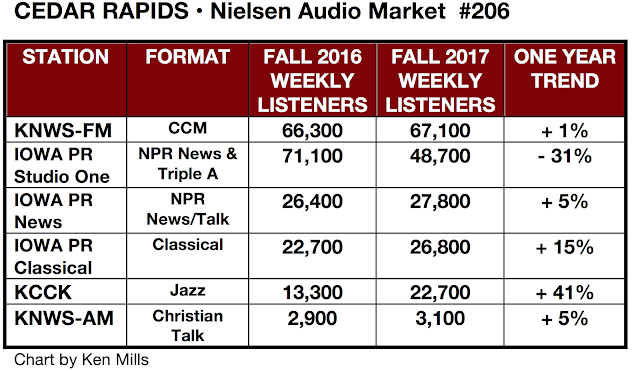 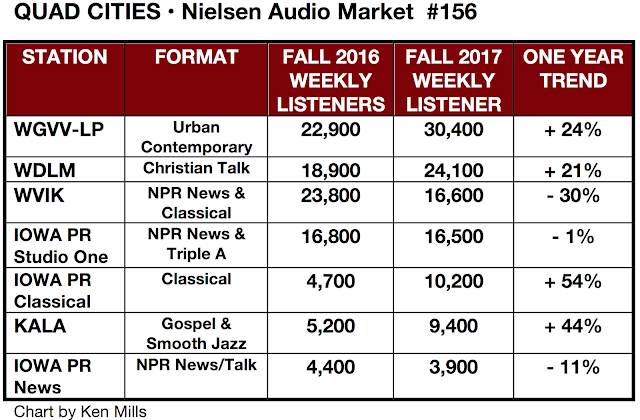 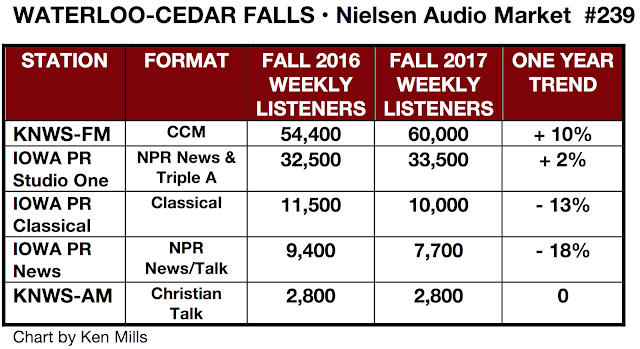