It is difficult to quantity the creative process.

Ideas can come in a flash or as the result of a lifetime of study.

How these ideas become a podcast, a program, a film or a company is what Eric Nuzum describes in his new book Make Noise: A Creator’s Guide to Podcasting and Great Audio Storytelling. 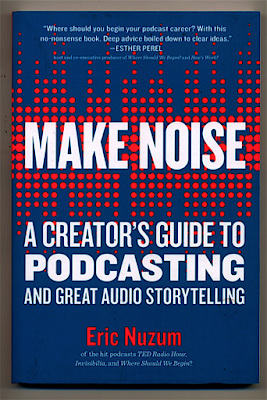 In Make Noise, Nuzum distills a career’s worth of wisdom, advice, practical information, and big-picture thinking to help media creators “make noise” – to stand out in multi-platform, multichannel environment.

Nuzum has spent three decades working on the front lines of content development. He was VP of Programming at NPR and Senior VP of Original Content Development at Audible. Now he is the co-founder of Magnificent Noise [link], a podcast production and creative consulting company based in New York City. This is Nuzum’s fifth book.

Think of Make Noise is a “how-to” book. Nuzum discusses the ways people listen, how to reach listeners, how to pitch the idea to gatekeepers and ways of managing a creative team. It is intended to both inspire and provide reality checks.

Words matter to Nuzum. Whether they are spoken or written, the words need to be precise and compelling. For instance, in Make Noise, Nuzum describes an exercise he uses to get creative team members to focus on the words that truly matter.

The goal of the exercise is to sharpen the descriptions and make certain everyone on the creative team is on the same page. What Nuzum wants to see is a consensus within the team that uses evocative language rather than overused words have lost their impact.

Nuzum talks  about how he used the ten-word exercise when he was consulting a leading podcast publisher. After the members of the creative team wrote their ten-word descriptions, they compared lists. Every member of the team had different words on their list. Obviously, there was the need for greater focus and improved clarity before the project could move forward. 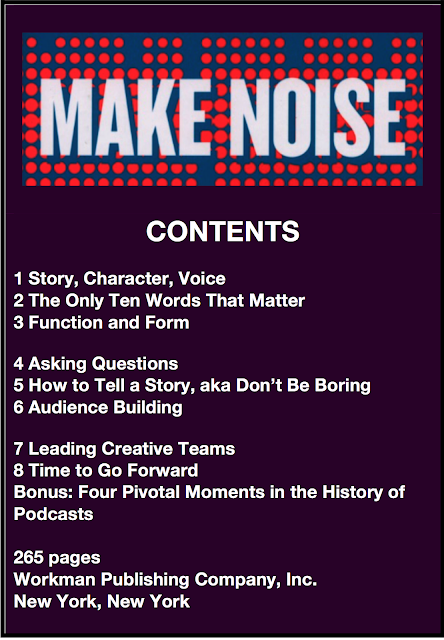 We also like the way Nuzum brings his young son Calvin into the narrative. Here Nuzum describes the importance of listening:

“I’ve told my young son with enough frequency that he roles his eyes when he hears it. He hasn’t fully grasped that interrupting is a bad thing. When he does, I often say to him: ‘When you are talking you aren’t listening.’”

In Make Noise, he talks about some of the people who have inspired him: How I Built This host and producer Guy Raz, Fresh Air host Terry Gross, former NPR programming head Jay Kernis, WBEZ's Chief Content Officer Izzi Smith and public radio researchers David Giovannoni and George Bailey.

A topic in the book that we particularly like a lot is the discussion about  "ambition." It describes the tensions between goals and expectations and the realities of limited  resources and time. Nuzum quotes Guy Raz:


“As creatives we always start with ambition. We imagine what we can create, and build the foundation of a vision in our minds, often largely divorced from the resources and constraints we have available. We only have so much time, money or assets to use.”

“If that precious resource is time, it requires a different type of creative problem solving. If your imagination and ambition yearn to create beautiful, sound-rich narratives with a ton of location interviews, custom sound design, and an orchestral score, great.”

“But if it is due in two days, that might be a tough prospect. So you learn to tailor your ambition by working with the resources at hand.”

We recommend Make Noise to anyone involved in the creative process, managers of public media organizations, artists, students and scholars.

It is the definitive account of the 1990s congressional hearings that were inspired by Tipper Gore’s desire to clean up the lyrics of rock and rap songs.

You see the listing on Amazon here.