It was a conversation with Diane Rehm, former host of The Diane Rehm Show, produced by WAMU and heard on NPR News stations nationwide.

Rehm retired from the program in 2016.

The interview was conducted by WAMU’s Kojo Nnamdi.

The two talked  about her new book and upcoming PBS documentary When My Time Comes [link].

Rehm, now age 83, has never shied away from discussing controversial issues. Her new project, advocating the right-to-die, is a no-nonsense look at end-of-life care in America.

If this topic is important to you, we recommend watching it online here. The interview is a perfect introduction to Rehm’s cause, the right-to-die movement. Rehm also shares anecdotes about her work with NPR and WAMU. 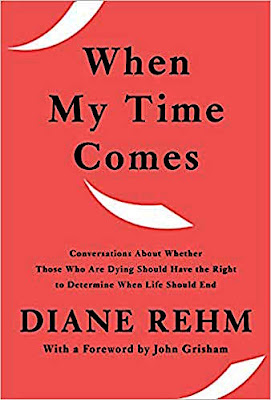 When My Time Comes was spurred by the death of Rehm's husband.

The book and the PBS documentary are based on investigative reporting by Rehm and her associates about the controversial practice of physician-assisted suicide.

It is now legal in nine states and District of Columbia.

Rehm is in favor of the of the practice but she knows many people are not.

The book and documentary includes people on all sides of the issue.

It also provides the facts and explores myths and misinformation about legally deciding to end one’s life.

When My Time Comes is both moving and informative. The documentary is scheduled to air on PBS stations in spring 2021. It is certain to provoke strong reactions.

Her former coworkers at WAMU are her biggest supporters. Lettie Holman, PD of WAMU, worked with Rehm for many years. Holman told us:

“Diane Rehm had 37 years of extraordinary radio and conversation.”

“From the beginning, she built her show with grit, intelligence and a passion to learn.  A national treasure, Diane was self-educated and a classic “American success story” beginning her radio career as a volunteer.”

“She leaves a legacy at WAMU of passion, a dedication to ideas, and conversation built around the core values of thoughtful analysis, civility and lifelong learning. Those principles continue to guide her life and work as a podcast host and author.”