I’ve been saving ratings data for over thirty years.  Below are two charts of noncommercial stations in Los Angeles – the most recent Nielsen Audio report from 2014 and an Arbitron report from 2000.

NOTE: These two charts represent different methodologies and can NOT be compared statistically. Here are big picture trends:

• KCRW has the same AQH Share and Weekly Cume but it had twice as many Metro AQH Persons in 2000.  Reasons: People using radio has declined since 2000; Time Spent Listening has also declined over 14 years.

• KKJZ was KLON in 2000.  Listening has declined somewhat but remains strong.

• KPCC’s listening has changed a lot. Fall 2000 was before American Public Media took over took over KPCC via a Local Marketing Agreement. The AQH Share and Weekly Cume have more than doubled over 14 years. Great job folks!

• KPFK’s listening has severely declined since 2000. KPFK’s AQH Persons in 2000 were three times larger than 2014; Weekly Cume was more than twice as big in 2014.  In my opinion, Pacifica’s dysfunctional management and governance is an embarrassment to all of us who work in public media.

• KUSC has significantly more listening in 2014 than 2000.  One reason for the increased listening to KUSC is the departure of commercial classical station KKGO-FM since 2000. 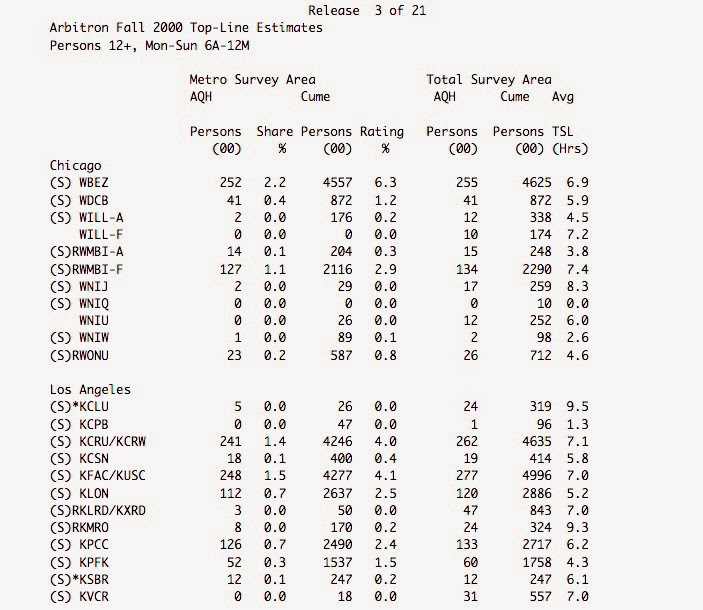 Definition of “Weekly Cume Persons” – “Cume” means cumulative listening – a measure of the total number of different persons in the designated metro area exposed to an encoded station for at least five minutes in a quarter-hour during an average week in a survey period.
Posted by Ken Mills Agency, LLC at 5:54 AM