According to estimates released by Nielsen Audio and the Radio Research Consortium, listening to KQED, San Francisco and WAMU, DC reached record high listening in the November PPM ratings. Plus, both stations top their markets in Average-Quarter-Hour (AQH) shares competing against two of the top commercial radio all-news stations.

In San Francisco, KQED surged past CBS owned and operated KCBS-AM/KFRC-FM in AQH listening. Here is the AQH trend courtesy of StationRatings.com:

KCBS-AM/KFRC-FM edged KQED in estimated weekly cumulative listeners. However, KQED’s weekly cume was 992,900, perhaps the highest number of weekly listeners ever for any noncommercial station.

The same pattern is occurring in Washington, DC. WAMU was the top station in AQH share for the second month in a row. WAMU’s 10.0% share was likely the highest AQH for any noncommercial station in a major market. Here is the AQH trend courtesy of StationRatings.com:

What this data means is that KQED and WAMU had fewer estimated weekly listeners but those people who are listening are doing so for longer periods of time. This is to be expected because many people tune to commercial news stations for quick traffic, weather and sports reports.

Elsewhere in the Bay Area, there was little change in the number of weekly listeners to KDFC and KALW.

There was also little change in the number of estimated number of weekly listeners to WGTS, WETA and WAMU’s Bluegrass Country channel.

The battle for Boston continues to be tight in AQH shares for WBUR and WGBH. Here is the AQH trend courtesy of StationRatings.com: 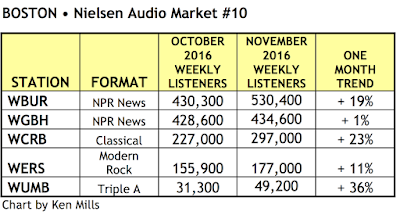 Also in Boston every other noncom station that subscribes to Nielsen was up in November compared with the previous month. You gotta love the 23% increase (77,000 listeners to Classical WCRB. 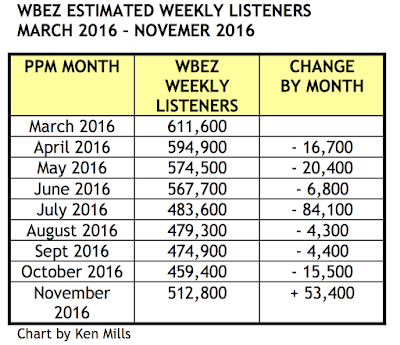 Though the gains were not as large as KQED, WAMU and WBUR, WBEZ finally had a month when its estimated number of weekly listeners went up.

On the right is a chart of weekly listeners to WBEZ month-by-month since March 2016.

Even with the November gain, WBEZ’s estimated weekly listeners is still off around 100,000 listeners since March. 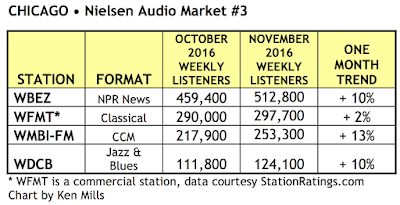 Elsewhere in Chicago spunky WDCB had a nice gain in weekly listeners.