A TRANSLATOR NO ONE WANTS • PPM RATINGS FOR NYC, LA & DENVER

Last May we reported on an FM translator for sale in Fort Collins, Colorado [link]. At the time I thought it would be snapped up pronto due to the FCC’s “Save AM By Moving It To FM” policy. Under that plan lonely AM stations were being paired with available FM translators within 250 miles of the AM station.


This past weekend I received a newsletter from a broker that said the Fort Collins translator is still available. It is K248CH FM 97.5, authorized to broadcast at 60-watts from a transmitter site 1,314’ above Fort Collins. No coverage map is available because K248CH is currently off the air. The translator may a commercial no noncommercial station. The asking price is $140,000.

So, why is this turkey still for sale?

The top reasons facilities like K248CH are put up for sale include:

• The seller needs the money.

• The seller wants to leave the market.

• There is considerable upside potential for the property.

K248CH is one of several stations on the Colorado Front Range that comprise the Grace Radio Network [link]. Programming originates from the Calvary Church in the Denver suburb of Aurora. Grace’s promo slogan is Solid Bible teaching and cutting edge worship 24 hours a day, 7 days a week. The programming is old-school religion, half-hour (even 15-munite) blocks of shows, each featuring sermons and services. There are very, very few religious noncoms with this kind of programming that are sustainable. 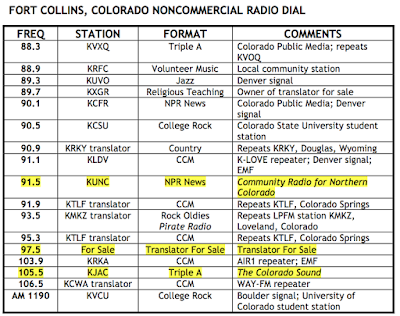 Perhaps Grace needs to money.  It is impossible to say because, as a church, it does not make its financial condition public. Fort Collins is an important city on the Front Range, so being there seems to fit Grace’s mission.

Likely the reason K248CH hasn’t sold is that there is ZERO upside potential.  The Fort Collins radio dial is full, thank you. I can’t think of any possible use for this translator.

Consider that Fort Collins is one of the most crowded FM dials in the nation. The chart above on the right shows 17 noncommercial voices already in the market. Contemporary Christian Music (CCM) is already well established in the market on K-LOVE and Air1 and others. I’ve got the brokers name and number if you want to pursue this opportunity. 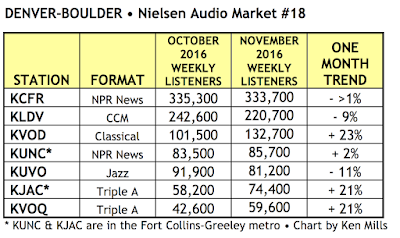 According to Nielsen Audio PPM data from the November ratings period, OpenAir KVOQ and 105.5 The Colorado Sound KJAC had nice gains in estimated weekly listeners when compared to the previous month. 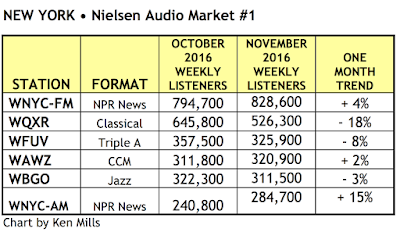 WQXR recovered from that slump in subsequent months. Meanwhile WNYC-FM was up a bit to 828,600 weekly listeners, near a record high for the station.

LOS ANGELES: EVERYONE IS UP EXCEPT KUSC 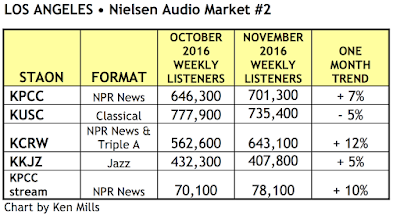 KPCC, KCRW and KKJZ each added estimated weekly listeners between October and November. KUSC was down slightly but it remains the top noncom station in the market.