Since I began this blog in September 2014 I have periodically published charts showing Nielsen Audio’s estimates of weekly cumulative listeners for the largest noncom stations regardless of format. I sometimes call this “the big board” because it provides a snapshot of noncom radio’s overall trends.

I created the first “big board” in late 2014. Today we are comparing data from November 2014 with the latest data from Nielsen and RRC for November 2016. We examined the number of weekly listeners for the Top 30 stations and this post is based on that analysis. 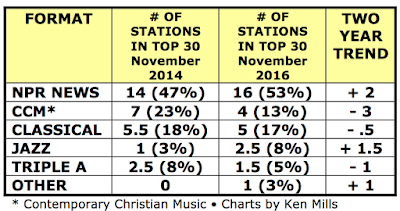 On the left is a chart with the overall trends. Here are the major takeaways:

• Eighty percent of the stations have increased their weekly cumulative listeners between 2014 and 2016. The likely means noncom radio in large markets has more weekly listeners now than two years ago.

This is a very, very healthy sign for noncom radio and public media.

• Stations featuring NPR News and other news and information programming are leading the trend. Not only do they now have over 50% of the stations in the Top 30, almost every NPR News station increased its number of weekly listeners over the two-year period.

The number of weekly listeners to Jazz stations were generally up. Christian Contemporary Music (CCM) broke even but now has fewer stations in the Top 30.

I broke the Top 30 into three groups to make it easier to read.  More comments follow the charts of below. Stations with a change of 20% or more are highlighted in yellow. 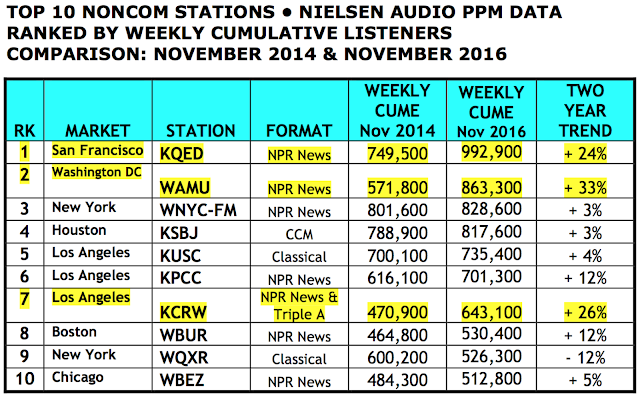 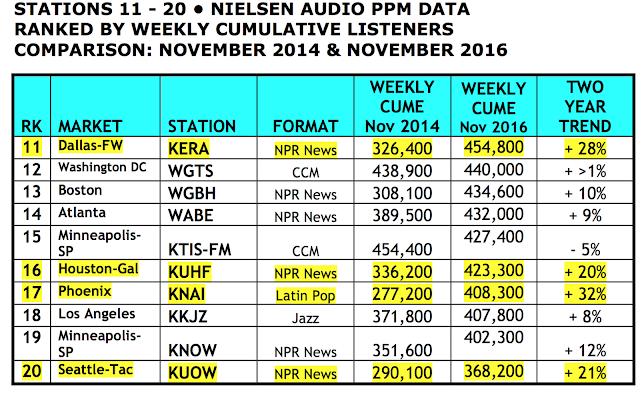 I love what KERA is doing in Dallas. WGBH is also trending up. You can’t beat the success of Jazz station KKJZ. As a former Angelino stuck up here on the Minnesota tundra, I sometimes listen to KJZZ online just to warm up! 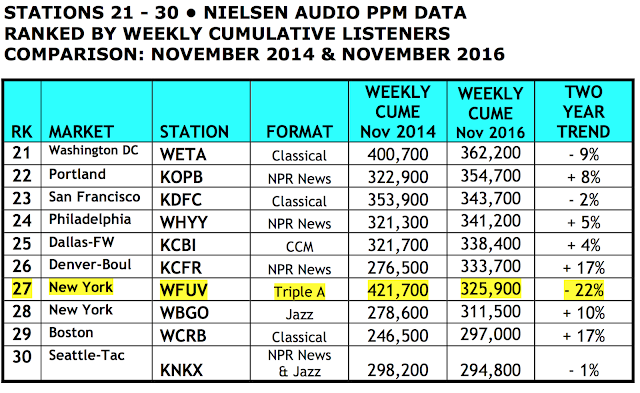