The new facility will give CPR city-grade coverage of the market (map for 102.1 is on the left). Colorado Springs (called “the Springs” by local folks) is the state’s second largest metropolitan area with a population nearing 500,000. As you probably know, the city is home to several major military facilities including the Air Force Academy and the NORAD Command Center inside Cheyenne Mountain. 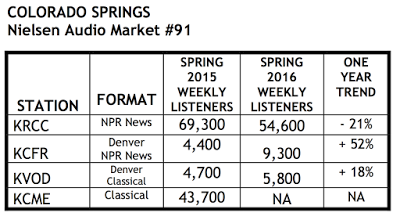 According to Nielsen Audio estimates for Spring 2016, CPR is already is a growing presence in Colorado Springs. (Fall 2016 ratings data will be available soon.)  Between Spring 2015 and Spring 2016, KRCC’s weekly cumulative listeners dropped by 15,000 (21%) while a repeater of CPR’s KCFR was up by 5,000, a 52% gain. CPR repeaters also gained listeners in Pueblo and Fort Collins-Greeley.

We have written before about Colorado’s “Front Range Mega City” that stretches up and down I-25 [link]. CPR seeks to be the dominant news source for the Front Range, plus less populated areas of western Colorado.

The Denver Post reported on January 11th [link] that CPR is increasing its news staff in a drive for statewide news coverage. According to the Post report, CPR now has a 30-person news team and continues to add new reporters. We reported earlier in January [link] about CPR’s search for a General Assignment Reporter & Backup host to cover territory from Colorado Springs to the New Mexico border to the western slope of the Rocky Mountains.  It is one of two new news positions related to the expansion.

According to the Post article CPR’s revenue is also growing. CPR’s revenue was  $16.8 in 2016, up about an 8 percent jump from $15.5 million in 2015. Public Media Company help CPR with the transaction.

KEN SAYS: The other day I mentioned public radio’s “greatest generation” who built today’s public media infrastructure. Put Max Wycisk, CEO of CPR, at the top of this list.

Wycisk work at KCFR, Denver in 1978, back when the station call letters stood for “Coloradio Free Radio.” Under his leadership, KCFR became a community licensee, established itself as “Colorado Public Radio,” expanded coverage to most of the state and now offers three distinct programming streams: NPR News, Classical and OpenAir, a Triple A service.

Wycisk was an early mentor of mine, for which I am extremely grateful.