You’ve probably heard the news that VuHaus has folded. It is gone because too few people were watching its videos and the site never became financially sustainable.

Portions of VuHaus, such as live music performances, will continue on the NPR Music site under a “Live Sessions” tab.

But it is also time to ask what lessons were learned.

VuHaus began with a flurry in 2015. CPB provided more than $1 million. More than a dozen stations paid $10,000 a year to participate. But, the cash evaporated because no new revenue sources were found.

Part of the problem was timing. Sites such as YouTube became the primary place to see and hear new music and performances. Then, even key VuHaus stations migrated to other platforms that had the potential to reach more consumers.

HOPING FOR THE KINDNESS OF STRANGERS

When we covered the launch of VuHaus in July 2015 [link], we discovered a flaw in the plan. Public Media Company (now “PublicMedia.co”), the organizer and fiduciary of VuHaus, was hoping for major gifts gifts to make the project feasible.Erik Langner, then the Public Media Company’s Managing Director, said at the time:

This part of the plan was “squishy” and we asked Langer for more specific information.

SPARK NEWS: You have been quoted saying that VuHaus will depend, in part, on philanthropy for operating revenue after CPB funding tappers off. Can provide more info about any prospective donors?

LANGNER: “Yes, major gifts are part of our strategy. VuHaus is a unique national nonprofit focused on music recovery and emerging artists.  We hope this will resonate. We are still determining the particulars on this.”

Though VuHaus did resonate with some people, there were too few to generate significant revenue and the anticipated donor dollars never materialized.

When Ed Subkis was completing his Master’s degree at Ohio University in 1975, he was fascinated with noncommercial community stations.

Subkis went on to become the GM of WCQS in Asheville from 1992 until 2007. Then he managed KHSU in Arcata/Eureka from 2008 until he retired in 2017. When Subkis was GM of KHSU there was peace with the University, with the community and the paid staff and volunteers.

A couple of months ago Subkis contacted Spark News for advice about his back files. He told us he had program guides from the dawn of public radio and an exhaustive collection of guides and internal information from Pacifica stations.

Rather than throw the stuff away, Subkis sent his collection to us for evaluation. We have been hired in the past to look through historical papers for possible appraisal. We reviewed the whole batch and decided to focus on the program guides because the images we found in them tell remarkable stories about the 1970's mindset.

The star of the show, so to speak, is a program guide from WBFO, Buffalo from March 1975.

At the time, WBFO was a hothouse of creativity and passion for public radio.

The staff at WBFO in March 1975 included several people who went on to have tremendous impact on our business:

• Marvin Granger was WBFO’s General Manager. He would go on to found Yellowstone Public Radio in Montana.

• Marcia Alvar was WBFO’s PD. She went on to become CEO of the Public Radio Program Directors (PRPD).

• Terry Gross was the Library Coordinator at WBFO years before Fresh Air.

• David Benders, a noted talk show host and author, was part of the staff of WBFO in March 1975 and he is still there today.

WBFO had women involved with all aspects of the station,

WYSO was very important to Subkis. He added these personal notes:

Subkis:  "When I was in graduate school and for some time after into the mid-1970s, I was researching community radio. I was able to visit WYSO."

"JoAnne Wallace was the GM at the time and she graciously showed me around and gave me a community radio orientation. We stayed friends for years, even working together when I was in California at KHSU." 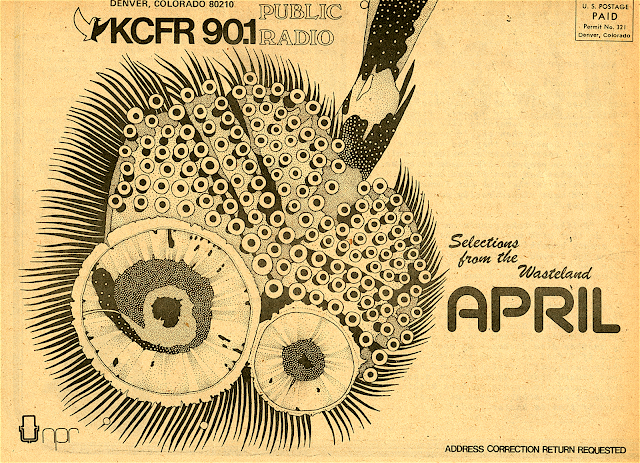 Subkis did not have a personal tie to KCFR, but he was in awe of the station and it's free spirit..

In the 1970s KCFR called itself Colorado Free Radio.

On the cover of the guide, the headline promotes KCFR as the home of Selections from the Wasteland.

An ad in the KCFR program guide promotes a new show Amber Lightning and the Star Slingers.

The images are reminiscent of The Fabulous Furry Freak Brothers, a stoner magazine sold in "head shops."

At the time, Subkis wanted to work at a Pacifica station. He shared a priceless story about a time when his radio goals came into conflict with his family life: 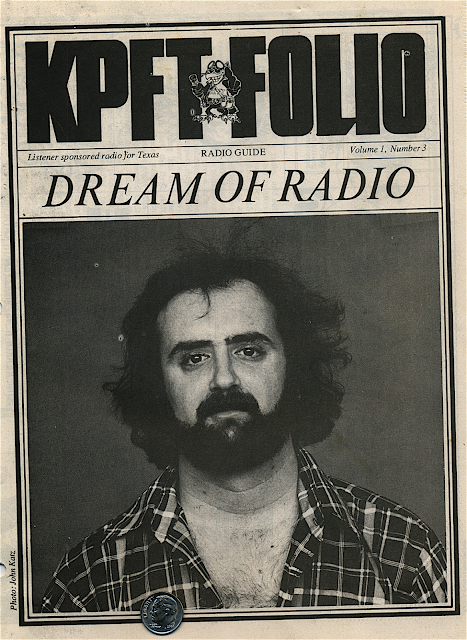 Subkis:  “I'm living in Virginia and driving north in my Wallace-voting father-in-law's car with him, my wife and a couple of others. We get into the DC environs and I can pick up WPFW. Finally, the first community station I can hear and it’s broadcasting some ideological or intellectual talk program not targeted to a general audience.”

“But nobody else wants to hear it, even though I'm telling everyone that this is what I do for a living and it's an important moment for me.”

“ It was in a VW Rabbit, a small car, and the next thing I know hands keep grabbing for the radio dial and wrists are being slapped left and right. There I was, fighting for community radio - literally.”

“I can't remember the end result, but a divorce did eventually follow.”

We thank Ed Subkis for sharing his back pages. If you have documents and/or images from the past that may be of interest to radio folks please contact us at publicradio@hotmail.com.