WHAT WERE YOU DOING THE MORNING AFTER THE NOVEMBER ELECTIONS?

I never really slept after the night of Tuesday, November 8th. Like many Americans I had watched the election returns roll in while I checked the local races on MPRNews.org.

My wife and I had some folks over to watch America choose its first woman to be President.  As you know, that did not happen and the party ended early. As the sun appeared on Wednesday morning, I checked my usual resources (Morning Edition, Joe & Mika, the New York Times) and I didn’t feel so alone.

I wasn’t alone. According to new Nielsen Audio PPM data prepared by Dave Sullivan from the Radio Research Consortium (RRC), the 7am to 8am was probably the most listened-to hour of the 2016 election cycle for 45 full-time NPR News stations. You can download the full report here.

The chart on the right shows that 1,158,200 estimated average-quarter-hour (AQH) listeners were tuned-in to the 7am – 8am hour (local times) on Wednesday, November 9th.

So, the morning after the election, AQH listening was up 24% to these 45 stations.

The chart of the left is familiar to anyone who follows listening to NPR News stations. It demonstrates public radio’s “Tent Poles,” the spike in listening in morning and afternoon drive times.

Though more and more listening from all sources is on demand, the clock and convenience still make drive times the key hours for NPR News listening.

Dave Sullivan’s report shows how Nielsen Audio PPM estimates can used beyond the normal stats.  PPM technology can provide granular views of listening patterns tied to an event, a specific date or even the stages of the moon. Thank you Dave Sullivan and RRC for the useful report. 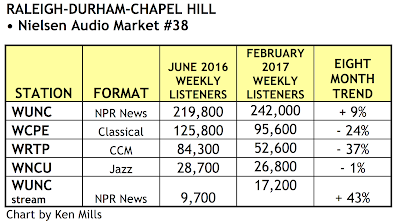 Yesterday we discussed stations in the Research Triangle market (Raleigh-Durham-Chapel Hill).  Today we have the noncom data for February 2017 compared with June 2016. WUNC showed respectable gains in estimated weekly listeners over eight months but the gains in streaming audio weekly listeners is remarkable. 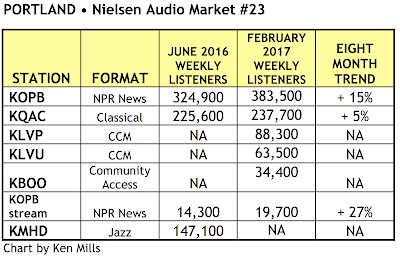 It is the same pattern in Portland. NPR News station KOPB. Estimated weekly listeners to the broadcast signals and streaming audio were both up compared to June 2016. 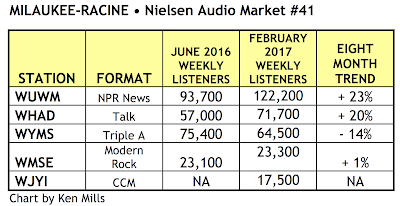 In February 2017 WUWM had its highest number of estimated weekly listeners in recent memory.

Estimated weekly listeners were also up for WHAD, the Milwaukee repeater of Wisconsin Public Radio’s Ideas Network. Ideas features public radio talk programming without airing NPR’s Morning Edition or All Things Considered. I am not aware of any other noncom station that do public radio talk and not ME or ATC.

Is the Ideas Network approach something that could work elsewhere? Or is it an "only-in-Wisconsin" phenomenon? There is one very good reason other NPR stations should consider Ideas for themselves: It is a far cheaper than the NPR news magazines.

The February PPM results for Austin show the same pattern for NPR News KUT. But, I am having difficulty believing the estimated weekly listeners audience drop for Triple A KUTX.

February was during the run-up to SXSW, a time when an amazing number of shows and other events are being finalized and promoted. It is important to remember that Nielsen Audio’s estimates are just that: estimates. The data is usually reliable but small variations of the sample are inevitable. Wait and see if a pattern emerges in future months.