Edwin Armstrong would be celebrating today if he were still alive. The technology he developed – FM radio – is the “go to” system on the broadcasting platform.

Armstrong was a true believer in FM.  In the 1920s and early 1930s he developed frequency modulation (“FM”) in a secret laboratory at Columbia University. He was granted five U.S. patents covering the basic features of new system on December 26, 1933.

In June 1936, Armstrong debuted FM with a public demonstration at FCC headquarters in Washington, DC. It went very, very well.  Perhaps too well it turned out.

During his presentation he used jazz recordings to demonstrate the differences in fidelity for FM an AM. FM blew AM away.  The signal was as clear as a bell. According to a post on Wikipedia [link], a reporter that was on the scene said:

"If the audience of 500 engineers had shut their eyes, they would have believed a jazz band was in the same room. There were no extraneous sounds. Several engineers said after the demonstration that they considered Dr. Armstrong's invention one of the most important radio developments since the first earphone crystal sets were introduced."

The major broadcasting companies in the US certainly noticed. Armstrong's new device scared the shit out of them, so to speak. They were all heavily invested in AM and quickly saw that FM’s superior system, owned by independent up-starts, was a threat to them.

In 1938, Armstrong signed on the first FM radio station, W2XMN, at Alpine, New Jersey, just across the Hudson River from Manhattan. The Mighty W2XMN at 42.8 on the FM dial pushed 40,000-watts over 100 miles, far surpassing the area reached by New York’s big AM broadcasters. In those days an FM receiver was one of the hippest devices available.

Unfortunately Armstrong had done some of his early work at RCA’s facilities. RCA buried him with litigation. Then the US entered World War 2 and FM (and television) was frozen.  As the war ended, RCA and other companies pushed the FCC to “redline” FM. The Commission moved FM to 88.1 mHz – 107.9 mHz making hundreds of thousands FM receivers obsolete. It ruined Armstrong’s business.

The litigation continued into the 1950s. Late on the night of January 31, 1954, Armstrong had had enough. According to the report on Wikipedia, Armstrong opened a window in his apartment on the thirteen-floor and jumped to his death. 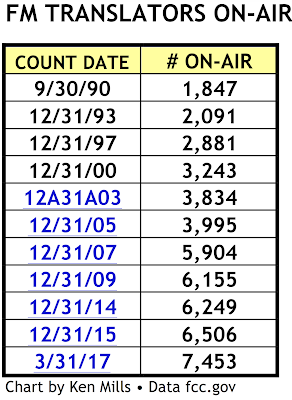 According to a new report from the FCC, FM dominates the broadcasting platform.

As of March 31, 2017, there were 20,243 FM stations on the air, counting full-power commercial, noncommercial stations, FM translators and LPFM.

As of March 31st, there were 4,666 AM stations on the air, and that number is slowly dropping.

In early 2016 I wrote in a post [link]: We are now experiencing The Last FM Translator Gold Rush. 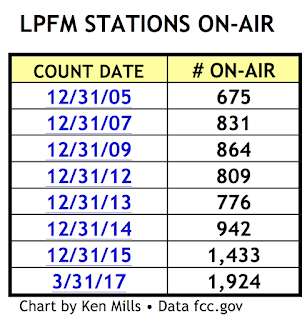 The boom in FM translators zoomed after the FCC permitted noncom broadcasters to feed programming to translators by satellite.

The folks at Moody called them “sata-lators.” 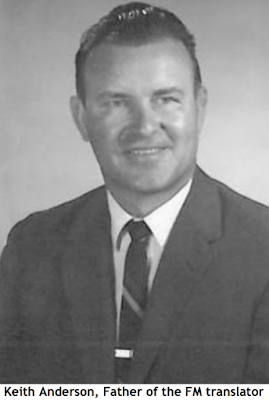 He manufactured “boosters” for TV stations in the Rocky Mountain West.

This was around the time John Malone (who founded cable giant Tele-Communications Inc. – TCI) was hooking up his first cable subscribers in Casper, WY.

I’ve got to think that Edwin Armstrong would be proud of FM today and grateful to the people who make it great.