Some people call it the “Trump bump,” others call it intense interest in American democracy, but it appears most NPR News stations are keeping their estimated weekly listeners from the recent election. Many stations had record high numbers of weekly listeners and other Nielsen Audio metrics in late 2016. Now they are learning if their gains are temporary or signs of overall increased interest in public radio news.

This week Nielsen Audio is releasing April PPM reports and we will tabulate the results in many of 50+ markets that are measured monthly. Our examination begins today with eight NPR News stations: WNYC-FM, KPCC, KCRW, WBEZ, KERA, KUHF and WHYY.  We are comparing April 2017 estimates with Fall 2016.  To provide additional context, we are also comparing the April 2017 numbers with Spring 2012 data so we can observe long-term trends. 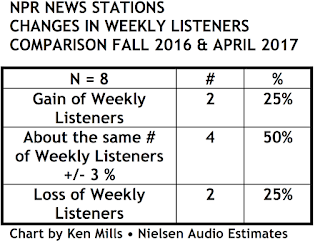 On the left is a scorecard showing the comparison between Fall 2016 and April 2017. Of the eight stations we examined, 75% saw either gains or about the same number of estimated weekly listeners since the election.

Two stations lost more than 3% of their weekly listeners. We will update this scorecard with each new batch of Nielsen Audio data. 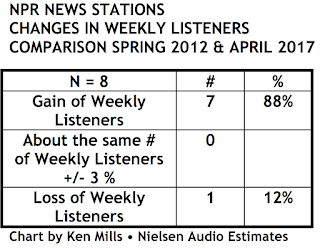 Here are the trends for the eight stations listed by market size: 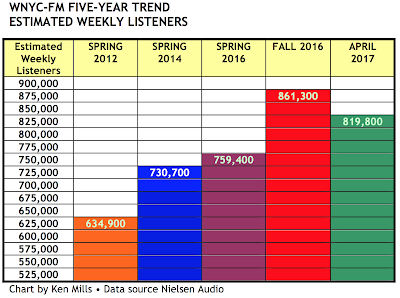 WNYC-FM, New York was down slightly between Fall 2016 and April 2017. However WNYC-FM had 22% more estimated weekly listeners in April 2017 than they did in Spring. 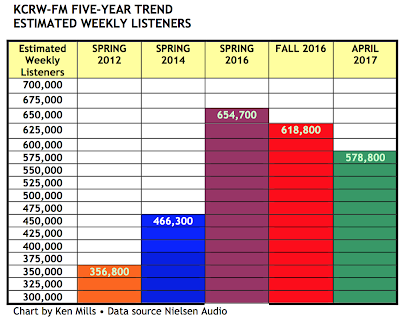 As you probably know, KCRW is a dual format station, News and Triple A. Therefore with the limited metrics available to me, it isn’t clear if NPR News programs out-paced hours of Triple A. Still, there is serious radio mojo at work for them. 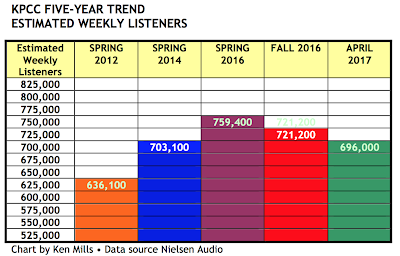 KPCC was down slightly from the fall and up over 8% since Spring 2012. 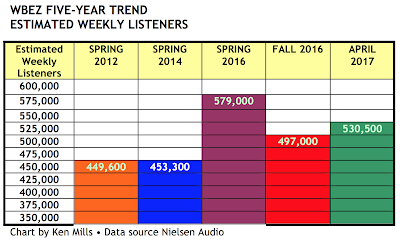 WBEZ had nice gains in weekly listeners from Fall 2016 and Spring 2012. 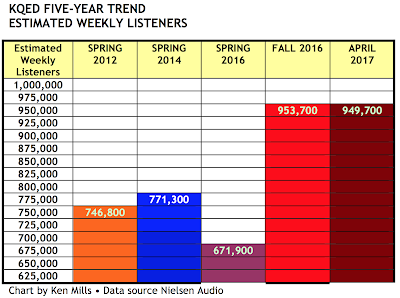 KQED, now the station with the largest number of estimated weekly listeners kept their record high number from the fall. Perhaps the biggest news is their 21% gain in weekly listeners. 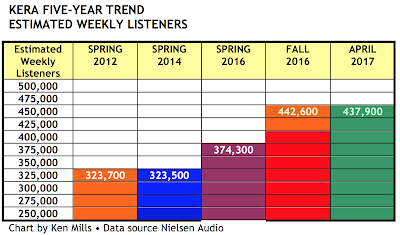 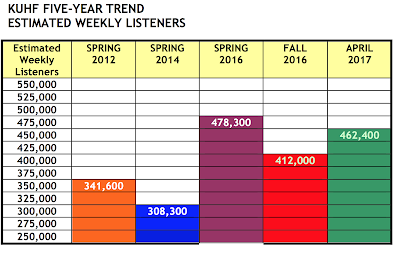 KUHF has had its ups-and-downs over the past five years but their estimated number of weekly listeners in April 2017 grew 26% from Spring 2012. 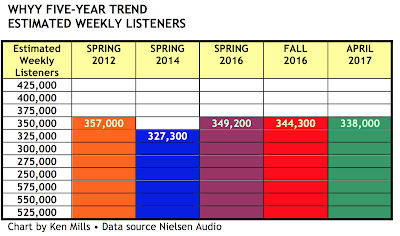 WHYY is the outlier of this group of stations with the number of weekly listeners down from both Fall 2016 and Spring 2012.