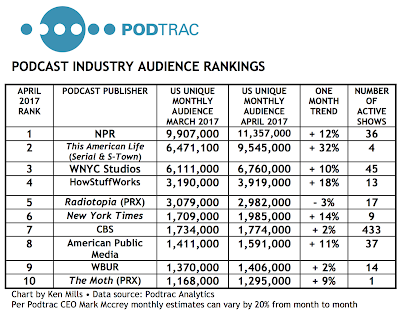 This American Life (including Serial and S-Town) had the most one-month growth in US Unique Monthly Audience, up 32% in one month.

The gains are likely from the launch of S-Town, which has had meteoric sales since it became available in late March.

Nine of the ten top podcast publishers gained in estimated US Unique Monthly Audience in April compared to March.

PRX’s Radiotopia was the only publisher that lost ground, down 3% in April.

Overall, podcast publishers related to public radio held seven of the top 10 positions in April and control roughly 82% of the US Unique Monthly Audience.

Now in it’s fourth year, Podcast Movement says in their promotional material they are expecting over 2,000 active and aspiring podcasters, as well as industry representatives and professionals, at the Anaheim Marriott August 23 - 25.

Registration fees are between $394 and $546 per person depending on how much conference access is desired. Attendees will have a choice of over 80 breakout sessions and panels, including sessions on the Technical Track, Creators Track, Business Track, Industry Track, and more! 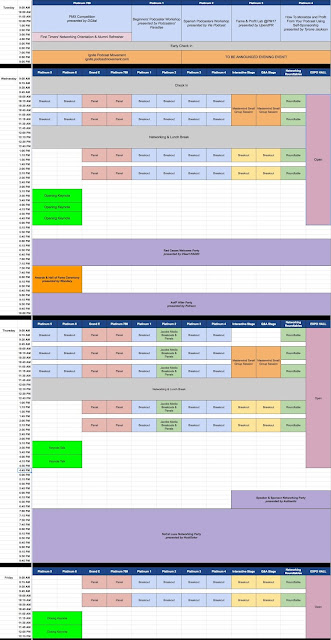 On the left is a conference schedule.  Click to enlarge it.

However, this year the organizers have asked a handful of public media speakers to appear at the August event. They include: Jennifer Ferro, GM of KCRW; Dean Capello, Chief Content Officer, WNYC Studios; and, Tamar Charney, Managing Editor of NPR ONE. Also, Jacobs Media is a sponsor of the conference.

I am bringing this up because of the contrast with the story about the top ten podcast producers above. Other than Capello and Charney, I don’t see anyone from that list speaking at this year’s Podcast Movement.  To me, this is disconnected with reality.

Podcast Movement looks like it is vendors talking to other vendors.

There is no harm in that. I recommend attending Podcast Movement if you have money to burn.

It is the type of conference where random acquaintances and serendipity is a highlight. The action and  practical education will happen in hallways, lounges and coffee shops – the places where business gets done. Plus, it is close to LA.