HostCon: THE BEST PUBLIC RADIO GATHERING YOU MAY HAVE NEVER HEARD OF 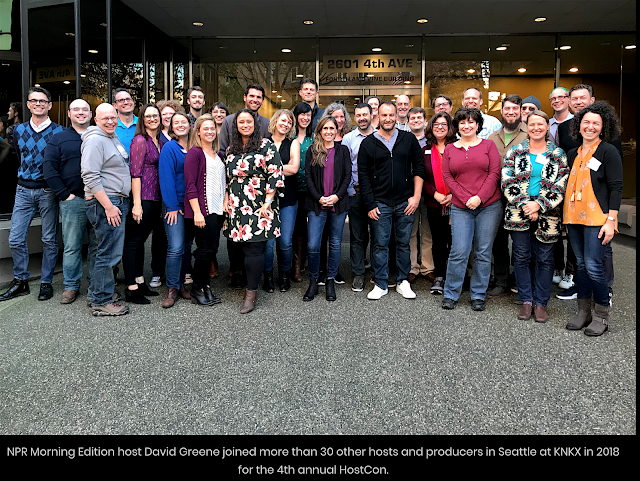 This story begins at the PRPD Content Conference held last month in Minneapolis.

An attendee told us how much he likes Spark News (thank you, much appreciated).

Then he asked: Why haven’t you written about HostCon?

We hadn't heard about it.

Then he said: “It is a hush, hush grassroots group by and for Morning Edition hosts and producers.”

We  did some research and contacted Ariel Van Cleave (AVC), the Executive Director of HostCon. Her first question for us was:

“Do you remember who told you about us? I’m super curious!”

This made us think that HostCon might be a secret society. This is very  unusual in the transparent world of public media. We asked AVC about it and she told us by email:

AVC: “The conference isn’t hush hush at all, actually. I’m delighted people are talking about it, especially in places like PRPD.”

“It’s just not been that advertised because of how it was created. It’s been growing bit by bit over time. First year had 13 people. Last year, the 4th year, had 32. David Greene has been helpful in getting NPR’s attention, which didn’t happen in a major way until this year. It’s a grassroots effort, with only one main organizer. So I’ve been holding off on the big, big noise until now because I wanted to build it up first. Pushing for more attention now makes sense to me.”

Van Cleave should know because she has helped organize HostCon gathering since they started. For most of that time Van Cleave was ME producer and the host of Weekend Edition Saturday at KNKX in Seattle.

She recently relocated to Chicago where she is Audio Editor at WBEZ.

It turned out that our timing was good because HostCon is going legit and mainstream this year.

First, here are the basics about HostCon [link].  The name is a play-on-words for grass roots meetings such as “Comic-Con.”

HostCon is built around local Morning Edition [ME] hosts and producers. It began in 2014 as an outgrowth of a Facebook page moderated by the late KPCC  ME host Steve Julian.

In the early years HostCon was a very low-key, off-the-record gathering that didn’t even have a registration fee. It was a chance for ME hosts and their teams to connect and share experiences. The first HostCon meeting was at WBEZ in Chicago.

Van Cleave told us in a telephone interview about the need for HostCon:

AVC; “ME can be a lonely shift. We need other people we can bounce ideas off. In some ways it is a self-help group.  Because of the hours, ME work calls for changes in a person’s lifestyle. You build your life around the job. ME hosts are a unique breed of people.”

AVC told us that HostCon is still built on camaraderie between like-minded people who work in similar situations. But, as it has evolved, practical matters and career development have become part of HostCon’s mission. As attendance has grown, the infrastructure that keeps it going his also matured.

HostCon is now a 501c3 organization. The Board is comprised of Executive Director Van Cleave, Kirstin Kendrick ME host at KNKX in Seattle and the late Steve Julian’s wife Felicia Friesema, a Los Angeles media consultant and freelance writer. AVC told us that Friesema helped found HostCom. She continues to be involved, in part to keep Julian’s legacy alive. (Scroll down to read more about Steve Julian.)

AVC told us incorporating was an important step to increase participation and raise funds for HostCon’s growth:

AVC: “The goal from the start was to make HostCon as legitimate as possible. We heard that some ME folks wanted to attend were having a hard time selling it to station News Directors and General Managers.”

“Now people who want to attend can say that HostCon is a nonprofit organization with an actual structure and a successful track record over the past five years.”

For the first time, this year HostCom has a registration fee of $150. CPB is not involved and the organizers want to keep the gathering affordable.

HostCon is being held Friday and Saturday, November 8th and 9th in Los Angeles. On Friday the group will meet at KCRW in Santa Monica. On Saturday the activities are at NPR West in Culver City. Registration and information are available here.

An open discussion with hosts and producers focused on what each of us does to eat well, sleep enough and stay sane in this early-morning shift.

David Greene, host of ME and Arezou Rezvani, ME Editor Arezou Rezvani. In addition to NPR and station issues, Greene and Rezvani will share their career paths and their current work on the show.

Geller is a broadcast consultant and author. She is President of Geller Media International [link] and specializes in on-air presence and hostiness.
• Saturday November 9 at NPR West
8:30 – 10am Welcome from NPR West and HostCon Organizers

The reporting side of hosting ME presented by Clay Masters, Iowa Public Radio ME host and Korva Coleman, NPR newscater.

Presented by Kenya Young, Executive Producer of ME and Catherine Mailhouse, Senior Supervising Editor/Producer of ME.

Presented by Arwen Nicks, Senior Producer for On Demand media at KPCC.

Steve Julian, ME host for KPCC, was an essential California icon.

For fifteen years, beginning in 2000, Angelinos woke up with Julian. He was their trusted companion as they drove on congested SoCal freeways.

Julian died from complications of brain cancer in 2017. He was 57 years old. Larry Mantle, host of KPCC’s AirTalk and Julian’s best friend said after his death:

"He was a singular talent and is completely irreplaceable. The tone and richness of his voice perfectly conveyed the man behind it."