IN PRAISE OF KCRW’S MATT HOLZMAN • NEWS ABOUT “AMERICAN ROUTES”


“This morning, as KCRW's signature music show Morning Becomes Eclectic began, DJ Anne Litt did an extraordinary thing: She openly grieved on air. Through tears and long pauses that would have created "dead air" panic at a commercial radio station, she remembered her longtime colleague Matt Holzman, who died of cancer yesterday at the age of 56.”

This is how Darby Maloney described the morning of Monday, April 13th in a post on LAist [link], the day after Matt Holzman died:

Holzman was an essential part of KCRW's success in three decades. He was not only the host of The Document, he was the creator. host and producer of The Business. In his spare time, he also was in charge of KCRW’s underwriting department.

According to an obituary in The Los Angeles Times [link], Holzman died Sunday, April 12th of stage 4 metastatic cancer at the age of 56. 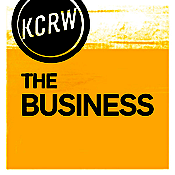 The Business is a program that is still required listening for folks in the entertainment industry.

Kim Masters, now the host of The Business, told the Times:

“He was passionate about his work and was the very embodiment of KCRW to colleagues and listeners. No one had a bigger heart. He had a great love for movies and even after he had moved on as producer he would tell us when to pay attention to a documentary. We always did and he was always right.”

In Maloney's tribute to Holzman she described him this way:

“He was a mentor to me and to many of us here. He taught me how to be better on the air and off the air. He was always there with encouragement and advice, empathy, understanding.”

“Any casual listener of L.A. radio would recognize his voice for his witty, relentless pitches during the fund drives. Behind the scenes he was no less vigilant. When Tom Hanks came to KCRW's basement home for an interview years ago, Matt famously pitched the Oscar-winning actor to pay to replace the dingy wall-to-wall carpeting.”

KEN SAYS: Over the years, we crossed paths with Holzman several times. We admired him for his honesty. In a world where promises often fade away, Matt Holzman was someone you could trust.

ADD AMERICAN ROUTES AND PAY NO FEES IN 2020
Promotional announcement

American Routes, hosted and produced by Nick Spitzer, is making it easy for you to add the show to your schedule.

We are making this offer now because we know that money tight in these uncertain times. Perhaps you have programs on your schedule now that will cost you too much in FY 2021.

It is a two-hour weekly program that is fed 52-weeks a year. American Routes is currently on 331 public radio stations.

We invite you to carry the program that Nat Hentoff praised in the Wall Street Journal:

“In the history of American radio, no series has come close to Nick Spitzer’s American Routes in exploring the many streams of this nation’s music.”

For more information please contact Ken Mills at 612-819-8456 or at publicradio@hotmail.com.