YES, PODCASTING DOES HAVE A CHART PROBLEM To support this notion, PBJ cited [link] the most recent top podcast publisher charts from Podtrac Analytics and Triton Digital.

This is confusing and it reinforces the stereotype that the podcast industry is run buy a bunch of amateurs who are looking for bragging rights.

Unlike other means of communication, there is no common currency like Nielsen has in radio and TV ratings. The lack of a believable metric causes advertisers to pause before spend money to advertise in podcasts. 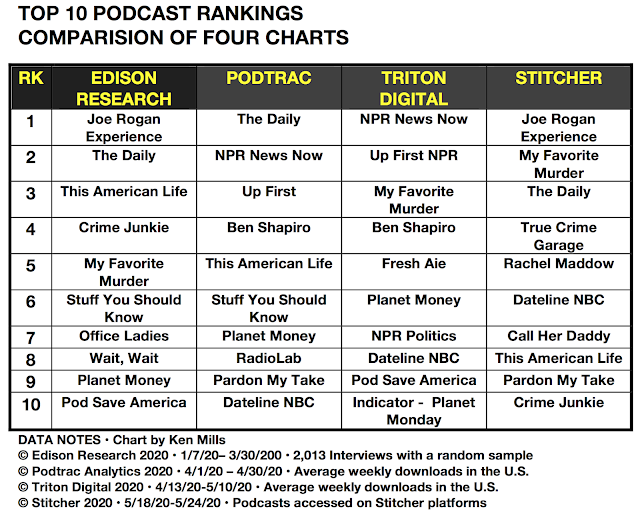 On the right is a chart Spark News compiled showing the Top 10 podcasts from four charts.

Each of the vendors use data collected during different time periods. This makes it difficult to do an apples-to-apples comparison.

Each of the four companies obtain data in different ways. Podtrac and Triton count incoming clicks and downloads without knowing if the respondent is actually a human being.

Triton only lists their clients. iHeart is not a client of Triton, so they aren’t listed.

Podtrac does include publishers that are not clients but requires publishers to use its proprietary software tracking system. But neither Podtrac or Triton acknowledges that The Joe Rogan Experience is probably the top podcast in the U.S.