THE TRUE STORY OF HOW AMY GOODMAN BECAME THE OWNER OF “DEMOCRACY NOW!”

We have received numerous comments, most then anonymous, about our coverage of the Pacifica Foundation, WBAI and the future of the noncommercial organization. Many of the comments deal with the endless feuds between various factions. We avoid reporting on these matters because they ultimately don’t matter.

One comment from an anonymous Spark News reader did catch our attention because it touches on a current topic: Manhattan Neighborhood Network’s (MNN) offer to take over WBAI with a Public Service Operating Agreement (PSOA).  Dan Coughlin is the CEO of MNN and has a deep and murky history with Pacifica.

We reported about MNN on February 5th [link]. Here is the comment we received:

"Here are some other fun facts about Dan Coughlin [the head of MNN]. He was an ally of Amy Goodman’s when he was a reporter for Pacifica’s national news (Pacifica Radio News)."

"Along with the hundreds of thousands of dollars poured into a professional public relations campaign (The Pacifica Campaign) against the then Pacifica board during the lawsuits of 1999-2002, run by Amy Goodman and Juan Gonzalez, Coughlin was part of the news department who went on strike to support Goodman in the ginned up attack on the board."

"When the board was finally forced out, Coughlin was appointed [Executive Director] by Goodman. Coughlin signed off on Goodman’s contract-of-a-lifetime which gave her for free all of Pacifica’s intellectual property to Democracy Now!, a show created by WBAI. Although she now claims she created the show she did not and was not its original host. Since 2002, Pacifica has been in the position of renting back the radio show it created and paying its former employee, Goodman, hundreds of thousands of dollars."

KEN SAYS: Because Amy Goodman is reportedly a very litigious individual, so we will be very careful talking about her. Therefore, in the information below, we will label factual information “Fact” and disputed allegations as “Rumor.”  In a quick nutshell, here is the backstory:

(Fact) Democracy Now! began as a local program on WBAI in February 1996. The host was Amy Goodman who started working at WBAI as a volunteer in the 1980s. After early success on WBAI, Democracy Now! went into national syndication. At that time the program was owned and financially supported by the Pacifica Foundation.

(Fact) Goodman quickly became a well-known commentator on cable TV shows and frequently appeared as an expert regarding political and social issues.

(Fact) Democracy Now! became the number one fundraiser for Pacifica and it’s stations. By one estimate Democracy Now! generated 25% of Pacifica’s total revenue.

(Fact) Goodman resisted Yasko’s oversight and input. Yasko was eventually driven out of Pacifica by a smear campaign allegedly mounted by Goodman and Juan Gonzalez, a Goodman associate who is now a co-host of Democracy Now!

(Fact) In mid-August of 2000, Goodman publically said she could no longer work for Pacifica. She threatened to boycott fundraising for Pacifica. Her threats caused panic within Pacifica and affiliated stations nationwide.

(Fact) In 2001, Goodman publically announced that she would quit Democracy Now! unless Pacifica turned over ownership of the show to Goodman’s private corporation, free of charge. 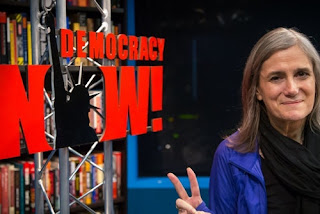 (Fact) Pacifica naively caved to Goodman’s demands and gave Democracy Now! to her. The deal also gave Goodman ownership of the program’s archives, intellectual property, and confidential donor lists. Pacifica also granted Goodman the right to fundraise for Democracy Now! rather than Pacifica.

(Fact) In the agreement with Goodman, Pacifica agreed to pay Goodman $500,000 per year to continue broadcasting Democracy Now!

(Rumor) Dan Coughlin, Pacifca’s Executive Director in the early 2000s, engineered and facilitated Goodman’s takeover of Democracy Now! Coughlin is currently the CEO of MNN. MNN is now working aggressively to take over WBAI via a PSOA.

(Fact) Meanwhile Pacifica is on the verge of  being forced into Chapter 7 bankruptcy. Pacifica’s debts reportedly exceed $8 million including the money owed to Amy Goodman.

It is hard to believe how gullible and naïve the leadership of Pacifica was then and probably still is today. Because the organization’s Board members are chosen for their political and social bonafides, not their business sense or experience in radio, they are open prey for kooks, game-players and bandits.

It is also hard to believe the hypocrisy displayed by Amy Goodman. On her show, she rails about corporate greed and malfeasance while she uses tactics that are more greedy than those used by Wall Street takeover pros.