K-Love’s national plans appear to be moving along unabated. But there is a problem: Listeners seem to be abandoning K-Love. 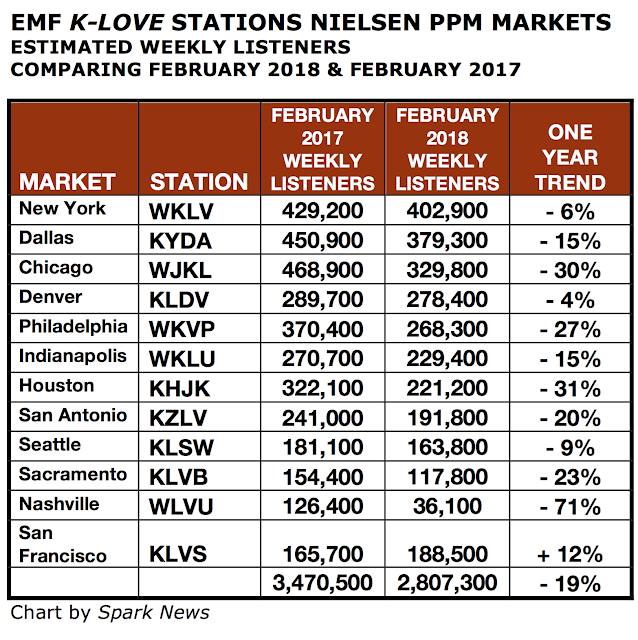 An analysis of K-Love’s performance in the Fall 2018 Nielsen Audio ratings by Spark News (chart on the left) shows a major decline in estimated weekly listeners compared to data from February 2017. We looked at data for12 K-Love stations in the nation’s largest markets and learned:

• In these 12 markets, the number of estimated weekly listeners to K-Love fell by almost 20%.

• Eleven of the 12 stations lost weekly listeners in the past year.

• The downward trend of weekly listeners in some markets was substantial: WLVU, Nashville was down 71%; KHJK, Houston was down 31%; and, WKVP, Philadelphia was down 27%.

In addition to these losses of listeners, K-Love’s performance in Los Angeles on the new KKLQ-FM has been disappointing. In the February 2018 PPM ratings, KKLQ – which covers the entire market with an awesome signal – had 370,900 estimated weekly listeners. The station K-Love replaced, The Sound, typically had four to five times the number of weekly listeners than what KKLQ is now reaching.

Spark News reached out to EMF President Alan Mason for comments which will hopefully appear soon.

We have no beef with EMF or K-Love. EMF has good reputation in the biz – they pay their bills, honor their commitments and seem sincere about their mission. But, the leaders of EMF are mere mortals and they do occasionally make mistakes.

WHAT IS THE PROBLEM AT K-LOVE?

K-Love is currently heard on approximately 725 FM and translators nationwide, so each situation maybe be unique. However, there are four universal reasons K-Love is having problems keeping listeners and gaining new ones:

Almost none of the artists heard on K-Love have any mainstream appeal. Popular artists who sing about their Christian faith, such as U2, aren’t played on K-Love.

On-air hosts have few chances to open the mic. When they do they have lots of housekeeping tasks to perform. The hosts aren’t curators of the music, they are “promo card readers.”

3.) There is virtually no local presence on K-Love.

K-Love lacks any sense of place. It sounds like radio from 35,000-feet. Music stations succeed because they become an integral part of a local music scene. K-Love lacks “boots on the ground.”

4.) K-Love is constantly asking for money.

A listener might hear four solicitations an hour for money. No tangible benefit for contributing is provided. The pitches are all about “give us money to keep us going.” 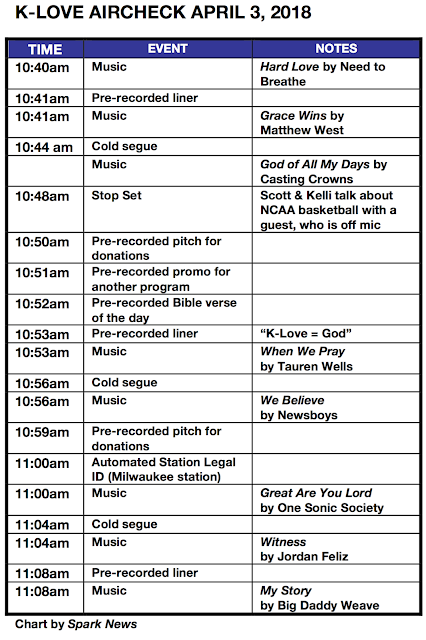 During this 30-minute period we heard: 8 songs, a five-minute stop-set, two appeals for money, three cold song-to-song segues, lots of pre-recorded liners and one verse from the Bible.

If you want to have a local event announced on K-Love or on the K-Love website, the network requires six weeks prior notification.

According to event submission rules found on K-Love’s website [link], “local event requests” are on a first-come, first served basis.

K-LOVE makes all final decisions regarding the announcement of local events and reserves the right to refuse any event deemed inappropriate or lacking general interest to our listeners.

Will anything change soon at K-Love? Probably not. The money will likely keep rolling in. After all, it doesn’t cost much to put satellite-delivered programming on the air 24/7. The only thing local on K-Love is the top-of-the-hour ID.


PUBLIC RADIO TECHSURVEY 2018 IS RAMPING UP 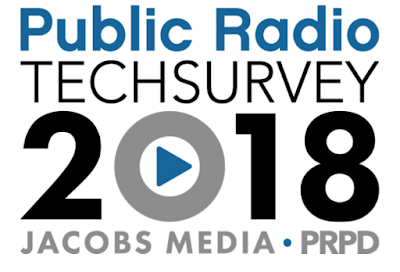 According to Jacobs, the goal of PRTS 2018 is to help public radio programmers better understand the impact and potential of online and mobile devices and platforms.

Jacobs says PRTS 2018 will drill deep into the recent ratings increases for NPR News/Talk stations. Also, PRTS 2018 explore in-depth the growing use of smart speakers, podcasting and whether the 24/7 news cycle will lead to more engagement by public radio news listeners.

The deadline for stations to sign up for PRTS 2018 is April 30th.  Fees for participating stations range from $350 to $550 depending on market size.