Long-time public media manager and programmer Maxie Jackson has been hired by the Pacifica Foundation to be its new Executive Director.

Jackson brings 25 years of management and programming experience to the top job at Pacifica.

Most recently Jackson was Station Manager at News/Talk WCPN in Cleveland.

Before that he was Senior Director of Program Development at News/Talk WNYC, PD at Classical WETA and GM at Jazz station WEAA in Baltimore.

Jackson is joining Pacifica at the time when the organization needs a strong and visionary leader. Pacifica, which owns stations in New York, Los Angeles, the Bay area, Houston and Washington, DC, remains millions of dollars in debt and has no plan for the future.

During his eight-month tenure, Livingston solved some of Pacifica’s immediate problems but made no changes in Pacifica’s mind-numbing system of governances. Pacifica has a reputation for being ungovernable and it has been marred by years of infighting. Livingston calmed the turf wars for a short time but it will be up to Jackson to change the trajectory of Pacifica.

In some ways, Jackson encountered a similar situation when he was President and CEO of the National Federation of Community Broadcasters (NFCB) from January 2010, through March 2013. Like Pacifica, NFCB has also dealt with internal disputes and a lack of unified direction.

According to news reports, Jackson’s tenure at NFCB started with high expectations but soon was mired in disputes. NFCB’s Board of Directors fired Jackson on March 4, 2013. The only reason that was stated publically was that the Board had “style issues” with Jackson.

After Jackson left, NFCB went into a tailspin of debt and rancor that threatened to end the organization. Things changed for the better in 2014 when Sally Kane became President and CEO of NFCB. Under Kane’s leadership, NFCB has re-emerged as a constructive force for community media. We hope a similar turn-around will happen for Jackson and Pacifica.

Today we are introducing a new way to look at Nielsen Audio PPM data: Three month trend lines. Nielsen publishes data for 13 “months” each year. The extra month is the “holiday book” covering Christmas and the weeks before the end of the year. We do not report on the “holiday book” because it isn’t relevant to public radio stations.

Spark News will use Quarterly PPM tabulations to compare station performance over time. Please let us know if you see corrections that need to be made, comments, requests or questions. Thanks. 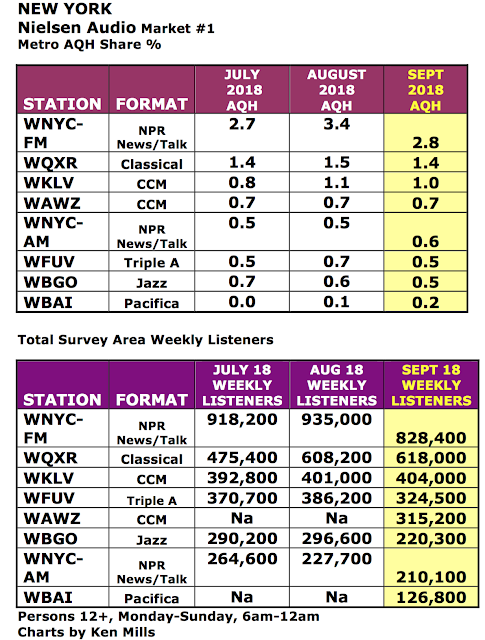 In New York, WNYC-FM lost some ground in September from the previous two months.  Estimated weekly listeners and AQH were both down.

Also in the Big Apple Jazz music WBGO continues a downward trend we’ve been seeing for over a year.

WNYC-FM is second in AQH share and third in estimated weekly listeners in NYC.

As usual, all-news WINS-AM leads the market in both metrics in September with a 4.2 AQH share and 1,704,700 weekly listeners. 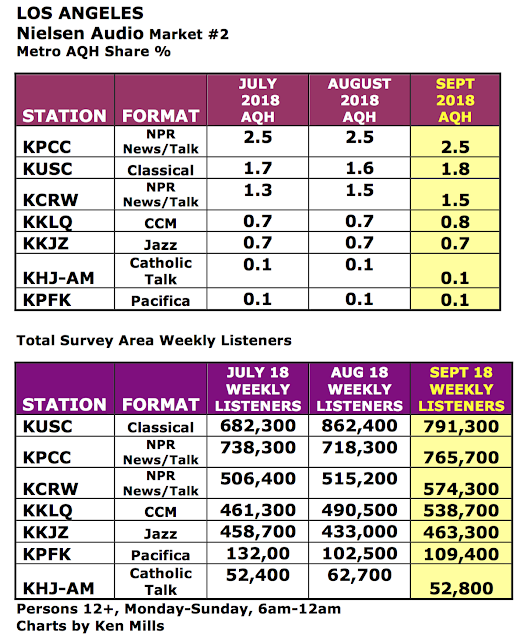 There hasn’t been music change in listening patterns in Los Angeles over the past three months. In September Classical KUSC had its best “book” in a hile. Jazz KKJZ is also up a bit. 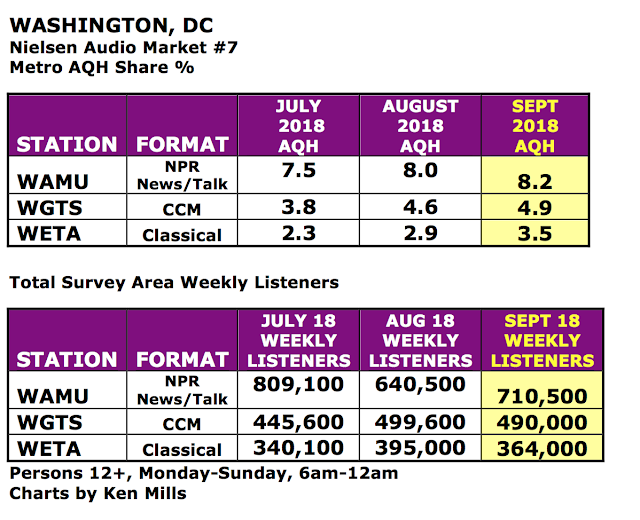 In the nation’s capital, de facto NPR News flagship WAMU is gaining ground in AQH share but estimated weekly listeners continues to lag behind the months around the 2016 election.