Thank you to folks who have taken our Reader Survey.  We appreciate the feedback. The survey is short and you can remain anonymous. Please participate by clicking on this link:

Things are changing in Boston. After pulling nearly even with WBUR in 2017, WGBH has slowly faded in the Nielsen Audio PPM ratings for Boston.

Looking at estimated weekly listeners, WGBH is in better shape with a decline of 25% compared to April 2017.  WBUR’s weekly listeners dropped 17% during the same period.

Spark News readers know what is probably happening: WGBH is still getting lots of tune-in, but listeners aren’t staying as long as they were in previous surveys. 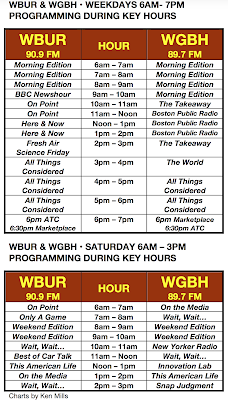 Without having hour-by-hour data for both stations, it is hard to tell whether WGBH’s losses reflect the full schedule or certain shows.

Both stations have solid weekday and Saturday program schedules – there isn’t a clinker on either station.

But, clearly something has changed at WGBH.

Our hypothesis is that the problem is with Boston Public Radio, WGBH’s 11am – 2pm signature show.

Boston Public started with a flurry.  It became the first news program that beat WBUR during key hours. The competition between On Point and Here & Now on WBUR and Boston Public defined one of WGBH’s supposed advantages: Local and live versus national and international. Perhaps the local mojo is wearing off.

The ratings aren’t the only things change about WBUR and WGBH. A few months ago, WBUR’s Station Manager Charlie Kravetz moved on.  We assume that WBUR is looking for a successor.  Meanwhile, WBUR’s MVP Sam Fleming is running the operation. We think Fleming should get the permanent job, but nobody asked us.

Meanwhile WGBH General Manager Phil Redo is retiring after over 40-years in the biz. Redo, a classy guy who turned around WGBH will exit as of July 2020. Redo joined WGBH in 2009 and was the architect of the stations all news and information format.

Redo is also credited with integrating WGBH’s news coverage across all platforms, not an easy task in an entrenched corporate cluture. 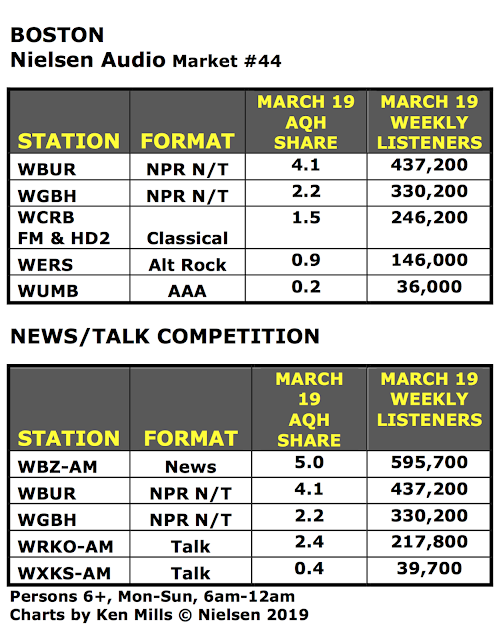 Classical WCRB had a solid “book/”

WERS was down a “tad” (professional term, lol).

Then there is iHeart’s talk giant WXKS-AM.

Both Rush Limbaugh and Sean Hannity can't stop WXKS from circling the bottom of the bowl.

Bill Lichtenstein’s wonderful documentary WBCN And the American Revolution has been getting rave reviews at film festivals across the nation.

The film weaves the story of Boston’s legendary underground and anti-Vietnam War radio station WBCN with Lichtenstein’s own life story. He started in radio at WBCN when he was a teenager.

Tickets are on sale now for the Boston premiere of the film on April 27 at 7:30 pm at the Somerville Theatre.

After the screening there will be a Q & A panel moderated by WBUR’s Robin Young featuring Lichtenstein, and WBCN announcers and staff from the film. Tickets are available online here.