TRNN [link] is a gutsy nonprofit news source that serves readers online and via digital devices.

Livingston has made a mark in public media by accepting interim assignments at organizations that seek stability and a new path forward.

He has taken interim leadership positions at Capitol Public Radio in Sacramento, Audio Independents in Radio (AIR) and the Pacifica Foundation.

Livingston often follows his interim roles with a search for his replacement.

Paul Jay, a Canadian journalist and entrepreneur, founded TRNN in 2007 in Toronto.

Jay has been the CEO of TRNN until Livingston was appointed to the job.

Livingston may have been brought in because, moving forward, TRNN faces challenges widening its business and coverage footprint.

• TRNN keeps a low profile. Many people, even folks in the media biz, are not familiar with them. Very little of TRNN’s content appears on public radio and TV. TRNN’s website is heavy with verbiage and light on multimedia reporting. 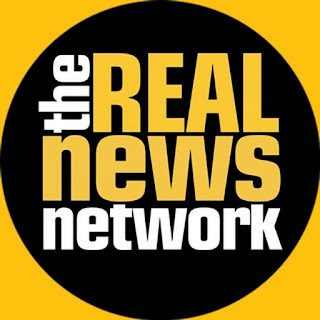 • TRNN is a specialty news provider that focuses on social and economic justice issues and the climate change crisis. Of course this important but it gives the impression that these are the only issues that matter. TRNN prides itself on its fact-based reporting but it has agendas.

• TRNN walls itself off from corporate revenue sources. It accepts no paid advertising, corporate or government support. It relies on donations and subscriptions.

Nielsen Audio continues to release Fall Quarterly Reports for station in markets that use Diary methodology. The current reports reflect listening in the months of October, November and December. 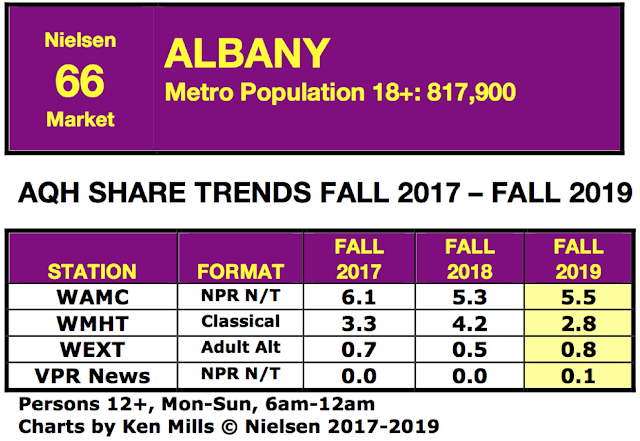 In Albany, NPR News/Talk WAMC keeps trucking but it had a larger AQH share in Fall 2017.

Classical WMHT has been trending down but there is still plenty of gas in the tank. 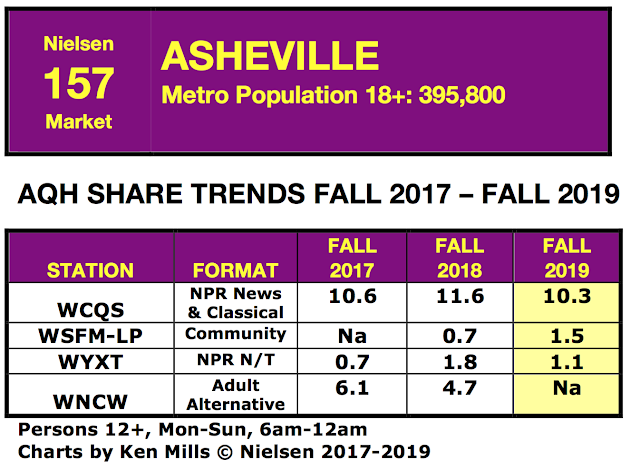 Dual-format WCQS dominates the Asheville market – something it has been doing for many years. Full-time NPR News/Talk WYXT (operated by WCQS) covers a much smaller geographic area.  Apparently Adult Alternative WNCW did not subscribe to the Nielsen ratings in Fall 2019. 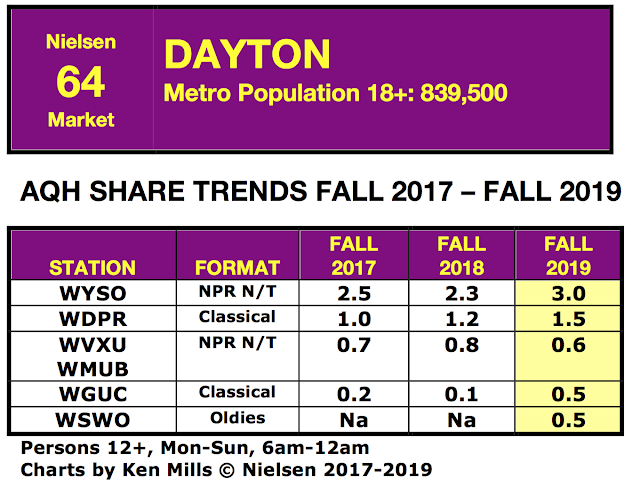 You’ve got to love WYSO’s performance in the Fall Quarter. Not only are they celebrating their independence as a licensee, their AQH share keeps rising.