NPR News and Triple A dual-formatted KRCC announced that music is being dropped during weekday afternoons and will be replaced with NPR/WBUR’s Here & Now and PRI’s The Takeaway with John Hockenberry. The schedule changes start Monday, February 15th. KRCC, a major factor in Colorado Springs and Pueblo, joins a growing list of stations in medium-size markets focusing on a single format during peak listening hours.

Capital Public Radio (“CPR”) in Sacramento is hiring a new morning drive Classical music host/producer. CPR is a very successful organization that operates NPR News KXJZ and Classical KXPR. According to station manager Carl Watanabe: It’s an opportunity for the right person to join a supportive and tight-knit team of enthusiastic radio and web producers.
Sacramento is a growing metro area in one of the most beautiful parts of Northern California. The city has a notable arts scene with a diverse educated population and excellent quality of life. CPR is an important part of life in Sacramento. To learn more about the gig, go to [link].
SOMERVILLE, NJ: EDISON RESEARCH & TRITON DIGITAL TO RELEASE NEW INFINITE DIAL REPORT RAIN reports [link] the next update of Infinite Dial, the highly praised media usage and consumption study, will be previewed with a Webinar on March 10th. This will be the 24th edition of the innovative cross-platform study that provides an in-depth look at a number of trends in media usage and consumption habits, with a special focus on streaming media, radio, mobile media, podcasting and social media behaviors. Registration is now open for the Webinar at [link]. It is open to a limited number of folks, so act now to participate.
WASHINGTON, DC: LPFM STATIONS PUSH FOR FM TRANSLATORS

Old timers may remember a time when FM translators were an afterthought for most broadcasters. Now they are the go-to way to get on the FM dial.  TOM TAYLOR NOW [link] reports that advocates of LPFM stations are proposing that LPFM operators be allowed to participate in next year’s FCC auction for new FM translators, part of the FCC’s initiative to move AM stations to FM. The demand for FM translators has never been greater and the prices to purchase them keep escalating. The irony of this proposal is that FM translators sometimes have better coverage than LPFMs themselves.
LAS VEGAS: KNPR IS SEARCHING FOR A NEW PRODUCER FOR STATE OF NEVADA

One of public radio’s fastest rising shops is KNPR, Las Vegas. As we reported in January [link] KNPR had a 35% growth in estimated weekly cumulative listeners between Fall 2014 and Fall 2015. KNPR’s State of Nevada, a daily one-hour interview and talk program has become essential listening, part of KNPR’s strategy to be Nevada’s news outlet of record.  KNPR’s management and programming are top notch. You can the complete job description at [link].
NEWS YOU PROBABLY CAN’T USE: EVERYBODY HAS A TENT POLE 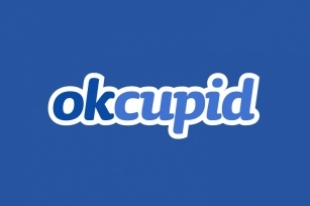 Everybody knows NPR News stations have tent poles – the spike in listeners for Morning Edition and All Things Considered.  The truth is, virtually every business has key times-of-the-day when activity surges.  A case in point is the popular dating/hook up site OK Cupid [link]. According to the Washington Post, OK Cupid and Tinder commissioned Nielsen Research to study user traffic.  Below is chart showing the top-line results: Peak hours are evenings 6pm – 10pm. A smaller spike also happens around 9am, probably for the “nooner” crowd. 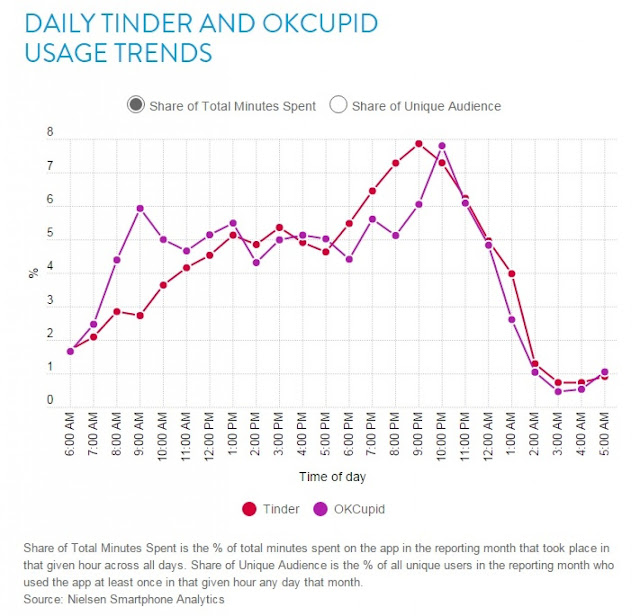