Last Friday (1/13) we reported on Colorado Public Radio’s (CPR) purchase of an FM frequency covering Colorado Springs and CPR’s stated intention to establish a statewide news presence. Colorado Springs is of particular interest to CPR because it is the second largest market in the state.

Another factor is that CPR may perceive KRCC as a weak competitor. Even without a full metro signal, CPR News already has a significant number of listeners in the Springs. CPR’s new signal, scheduled to start in April or May, is a direct challenge to KRCC.

Though I am taking KRCC's "side" in this post, I like both stations. So I am not playing favorites.

Now the Fall 2016 Nielsen Audio ratings estimates have arrived and the listener pattern is the same. CPR News already has 18% of KRCC’s weekly cumulative listeners. On the left are Nielsen Audio results for the past four rating periods. CPR appears to be building momentum. 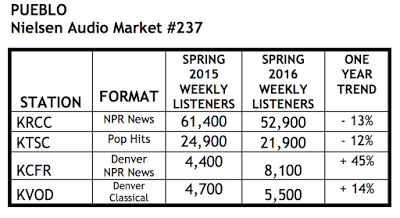 The pattern is the same in Pueblo, 50 miles south of Colorado Springs, where KRCC also competes with CPR News. (Fall 2016 Nielsen Audio data for Pueblo has not yet been released.)

A few years ago I was a consultant for another station in the western US that was in the same situation. My client station had a dual-format, NPR News with blocks of Triple A in mid-morning and mid-afternoon. The competing station from a large city around an hour north of my client signed on a 24/7 repeater airing NPR News. Within two years, the big city competitor had taken roughly 25% of my client’s weekly cumulative listeners. My assignment was to help turn things around. My client’s station now has about 90% of the “news cume.” 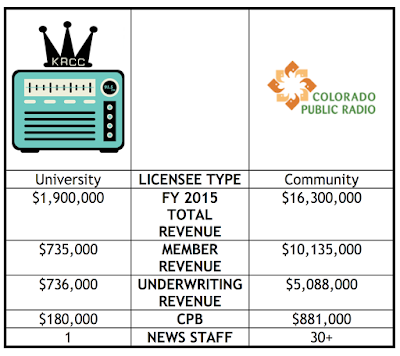 What would you do if you were in KRCC’s situation?

First, start with the basics. On the right is a chart with an overview of the two competing organizations. Though CPR is much bigger, there are many similarities.  For instance both competitors received ample “listener sensitive support” – pledging and underwriting.

CPR and KRCC have different types of licensees.  Often a Community licensee can move more quickly than a University licensee.

However, the big, BIG difference is the commitment to news by CPR. KRCC has one (1) person handling all of their news, plus the news person hosts Morning Edition. This puts KRCC at a major disadvantage with news listeners. 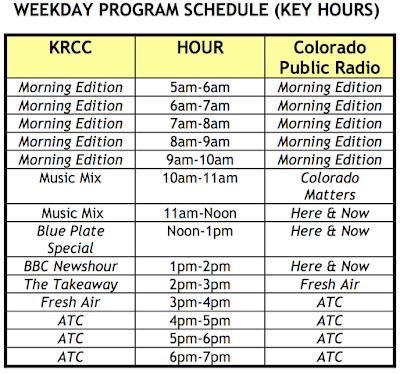 Next let’s move to programming. On the left are schedules for both competitors during key listening hours when the most people listen to radio.

Both air Morning Edition during the same hours. After ME you can almost hear the push buttons “click” with people tuning away from KRCC. CPR’s talk and interview program Colorado Matters is consistently a strong performer. Here & Now is now is a popular midday national and global news source.

Some new listeners to KRCC might tune in for the music but two hours is not enough time to build an audience. Rather music, I’d air WAMU’s new 1A. I’d keep Blue Plate Special (a blues program) at Noon.

CPR also has the advantage of being the first station in the market to air All Things Considered (ATC) at 3:00pm.  By waiting until 4:00pm to start ATC, KRCC is letting listeners establish the habit of tuning elsewhere for ATC. This can become a habit. 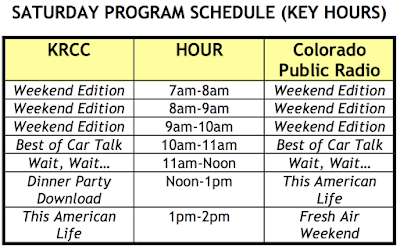 Both stations are competitive in the key Saturday hours. Both will have to replace Best of Car Talk soon, so KRCC should put something sexy in the 10:00am hour.  Personally, I’d choose The Moth Radio Hour.

The most important thing for KRCC to do is to re-evaluate their lack of commitment to news.  For an example, look at KUNC in Northern Colorado. They are having much better success competing with CPR because of their news focus on their area.

KRCC: Be who you are.  CPR’s biggest advantage, statewide news coverage, is also a liability when competing against KRCC. KRCC should be all about Colorado Springs and Pueblo all the time.  This is your hometown, so don’t give your listeners reasons to tune away. Adding more news and information is essential to compete with the out-of-town interlopers.