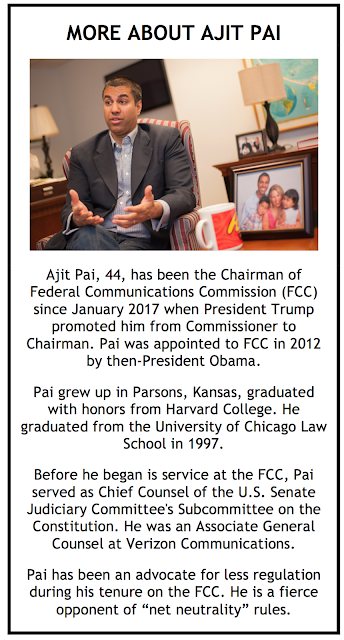 However, the proposed rule change specifically says that it does not apply to NCE stations funded by the Corporation for Public Broadcasting (CPB). It appears to be a “gift” to religious broadcasters. Pai said CPB-funded station could ask for a waiver.

The proposed rule will be discussed (and perhaps voted on) at an open meeting of FCC Commissioners on April 20, 2017.

Backers of the rule change say it will make fundraising easier for soliciting funds for disaster recovery but the rule, as written, benefits a much wider group of non-profit organizations.

Here is how Pai described the intent of the new rule in a blog post:

We will also consider giving NCE broadcasters more flexibility to raise money for disaster relief groups, charities, and other non-profit organizations. In the past, the FCC has granted waivers to allow NCE television and radio stations to solicit donations for causes such as Hurricane Katrina and Haitian earthquake relief. I believe that we should make it easier for stations to engage in this type of activity so long as it doesn’t compromise their non-commercial nature.

I’ve heighted the phrase other non-profit organizations because it appears to open the door to fundraising for 501c3 organizations involved in advocacy concerning social issues. The National Religious Broadcasters (NRB) has been lobbying for such a measure for over five years.

The FCC draft order is explicit that only 501c(3) organizations qualify. That includes most but not all churches because some have chosen not to formally apply for IRS exempt status. In general they are still allowed to claim non profit status under state law but without the federal 501c (3) reporting requirements.

Organizations heavily into social causes usually channel that activity into a 501 c (4) civic league.  For example the main ACLU is a 501c (4) but the ACLU Foundation is a 501c (3).

If the new rule in enacted there will be a new distinction between two types of NCE stations: One for CPB-funded stations and the other for all other noncoms including religious licensees.

Pai explained in his bog post why stations funded by CPB do not qualify:

“Certain stations have indicated that they have no interest in engaging in such fundraising activity on behalf of third-party charities. The push for relaxing the limits has come from – religious stations, and particularly the National Religious Broadcasters.”

In other words, because only religious broadcasters asked for the rule change, they are the only organizations that can use it.

Over the past several years, NPR has led a legal push back to the plan saying such a change would result in listeners being inundated with requests from local nonprofit groups, which in turn could affect station pledge drives. NPR has instead said the FCC’s current system that allows a broadcaster to obtain a temporary waiver to raise money in a specific instance strikes a better balance.

CASE STUDY: HOW MUCH CAN A NONCOM MAKE FOR A THIRD PARTY?

American Family Radio (AFR) based in Tupelo, Mississippi, is well known for its conservative stand on various social and political issues. AFR [link] is owned by the American Family Action (AFA), a 501c3 organization. AFA brought in revenue of $29,790,000 in tax-year 2014, according to the most recent IRS data available. Almost all of the revenue came from individuals.

AFR’s stated goal to be a champion of Christian activism.  They have this call-to-action on their website:

If you are alarmed by the increasing ungodliness and depravity assaulting our nation, tired of cursing the darkness, and ready to light a bonfire, please join us.  Do it for your children and grandchildren.

This is a long way from helping victims of Hurricane Katrina or a Jello Jump for Jerry’s Kids.

AFR’s mission is to inform, equip, and activate individuals to strengthen the moral foundations of American culture, work that sometimes becomes political. AFR is currently a leader of an effort to persuade Disney Studios to edit their film Beauty and the Beast. AFP wants Disney to remove “a gay-oriented moment” in the movie.

AFR is pushing a petition against Disney’s alleged pro-gay bias on all of its platforms.  The petition is sponsored by Focus on the Family, a Colorado-based 501c 3 organization. During its radio programs, AFR stations are asking listeners to “flood the telephones lines of U.S. lawmakers” to publically “shame” Disney.