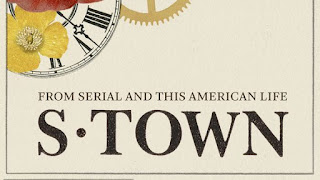 S-Town, the new narrative podcast from the folks who brought you This American Life (TAL) and Serial, debuted in late March with over 16 million downloads, a record for the launch of a new podcast podcast.

Brian Reed, a producer for TAL, is the host of the seven-episode documentary series. S-Town tells the story of a rumored murder in his rural Alabama town and the investigation into the son of a wealthy family who had been bragging that he got away with murder. According to Reed, the storyline continues and "Someone else ended up dead, and another story began to unfold–about a nasty feud, a hunt for hidden treasure and the mysteries of one man's life.” 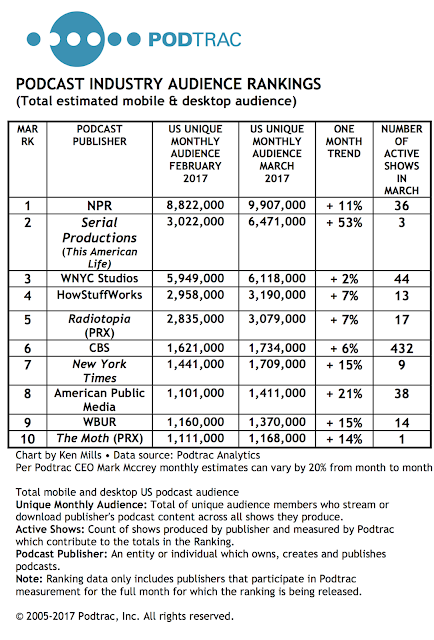 Though there are limitations with Podtracs’ data, their charts are becoming an industry standard. They do not publish audience estimates for publishers who are not affiliated with Podtrac. Also, according to Podtrac CEO Mark Mccrey, metrics from month-to-month can vary by as much as 20% because of a number of factors.

Seven of the top ten publishers are affiliated with noncommercial stations. The New York Times, a commercial publisher, has consistently increased their estimated Unique Monthly Audience.

When the Public Radio News Directors, Inc. (PRNDI) chose Miami as the site for their 2017 annual conference, little did they know the gather would be at “ground zero” for a major confrontation between WLRN and its licensee, the Miami-Dade School District. We reported on the situation in late February [link].

For the past three decades, Friends of WLRN, a nonprofit group, has operated WLRN FM/TV with considerable success. Recently a power struggle between the district and the Friends of WLRN has erupted over the question of who is directly responsible for news coverage. The District want reporters to become employees of the District and have the newsroom follow the District’s policies. The dispute has yet to be resolved.

The PRNDI Conference meets at the Newport Beachside Hotel & Resort on Friday 6/23 & Saturday 6/24. Pre-conference training will take place June 21 & 22. Complete information about the conference is here.

Conflicts Between Newsrooms and Station License Holders, Saturday’s main conference meeting, will be held from 8:30am – 9:45am.

In addition to the conflict regarding WLRN, the recent firing of a reporter at WUTC, Chattanooga will be discussed. Yet-to-be-named panelists will look at station’s firewalls between the newsroom and the license holder. The session will explore navigating conflicts with licensee and strategies newsrooms can employ to protect their independence.

A complete agenda for the PRNDI conference is here. Other sessions that look interesting to me include:

Senior VP of News and Editorial Director for NPR, Michael Oresekes discusses the importance of editors, the challenges journalists are facing in the current media environment and how stations and NPR can continue to strengthen their collaborative relationship.

Poynter’s Al Tompkins will address some of the most common mistakes journalists make when reporting on firearms.

What’s the difference between a rifle and a shotgun?   What’s a “semi-automatic” rifle?   And what does the “AR” in “AR15” mean? In public media, very few of us own guns. We talk often about firearms in our reporting, so this session will provide you with a better understand of guns and the gun culture.

Elana Newman, Research Director of the DART Center for Journalism and Trauma, will tell you the signs of potential depression among colleagues.

During this session, you will learn how to respond in a supportive and appropriate manner when trauma and tragedy seem overwhelming. If you are feeling any low level stress from covering a relentless news cycle soaked in negativity, this session is for you.

Reveal host Al Letson will emcee the annual awards banquet featuring winners of over a dozen news categories. Also announced will be the winner of the National Endowment for Financial Education (NEFE) Consumer Financial Reporting Award. The winner received a cash prize of $1,000 from NEFE.