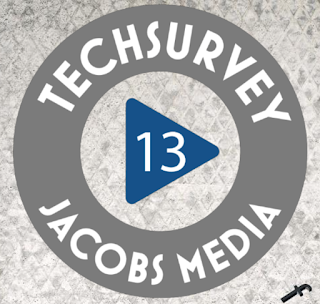 Fred Jacobs released the results of Tech Survey 13 last Thursday (5/4) at the Worldwide Radio Summit in Los Angeles. As use of online and mobile devices and platforms continue to rise, broadcast radio remains the most ubiquitous media source for in-vehicle listening.

Tech Survey 13 probes the use and perceptions of various media sources by commercial radio station listeners.  Over 50,000 people were surveyed online in January and February of 2017. More than

Jacobs Media is now conducting the Public Radio Tech Survey 9 (PRTS 9).  The results will be released at the PRPD Content Conference in August. Here are some of the most important takeaways from Tech Survey 13: 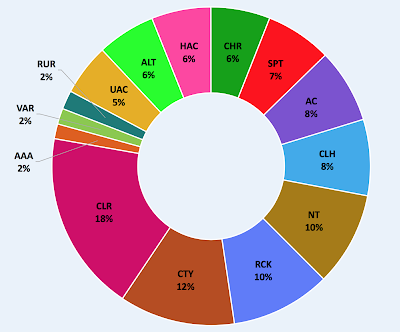 On the right is a slide showing the composition of in-tab Tech Survey 13 respondents by radio format. As you can see most of the 50,000+ respondents were listening to music stations.

The two spoken-word formats shown in the slide – News/Talk (N/T) and Sports (SPT) – comprise only 17% of the sample base.

In past PRTS surveys the vast majority of the respondents listen to NPR News stations.

• USAGE OF SMART TV, STREAMING VIDEO & SMARTPHONES ARE UP SIGFICANTLY IN THE 2017 MEDIA PYRAMID 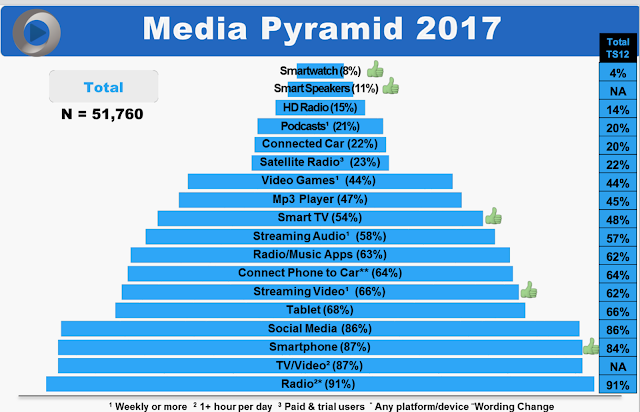 The Media Pyramid is perhaps the most-frequently quoted summary slide of Tech Survey results. The 2017 Tech Survey 13, compared to Tech Survey 12, indicates Smartphone ownership is now at a record high level, 87%. Use of Smartphones is so ubiquitous you can now call it a national standard.

Smart TV ownership is growing fast due the popularity of Netflix and other program providers. More than half of Tech Survey 13 respondents say they now own an Internet-connected television. Four in ten watch Netflix on a weekly basis. 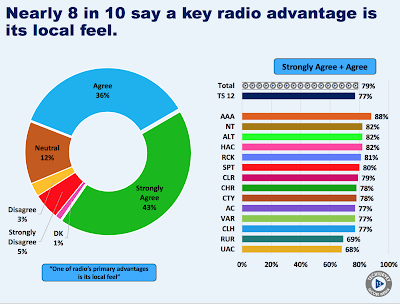 Keep in mind that the majority of respondents to Tech Survey 13 listen to music formats. Apparently the defining advantage for radio is the ability to provide curation, information and events in the local community. Almost eight in ten respondents cite this as radio’s advantage.

When examining listener preferences by format, the value of local content on commercial Triple A stations tops the list. This stat shows the importance of a hyper-local approach and reinforces what noncom “Music Discovery” stations are doing.

• ONE-FIFTH OF RESPONDENTS LISTEN TO PODCASTS WEEKLY OR MORE OFTEN; OVER HALF LISTEN VIA SMARTPHONES 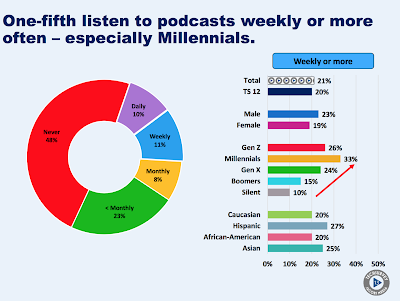 Again, keep in mind these are listeners to commercial radio, predominately music stations. Noncommercial, public radio listeners tend to listen to podcasts at a higher rate. It will be interesting to see how much bigger podcast listen is in PRTS 9. Respondents of millennial age are the heaviest consumers of podcasts.

One aspect of podcast listening reported in Tech Survey 13 that I find interesting is the adoption rate among all races. According to the survey Hispanic folks have the highest listening rate. Question for Fred Jacobs: What are they listening to? I am not aware of many podcasts for Hispanic listeners. 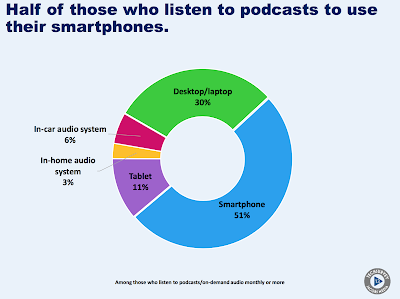 Podcasts plus Smartphone delivery is a marriage made in heaven.

You might say that almost universal use of Smartphones helped establish the current podcast craze.

I am part of the 30% that listens to podcasts on my laptop. 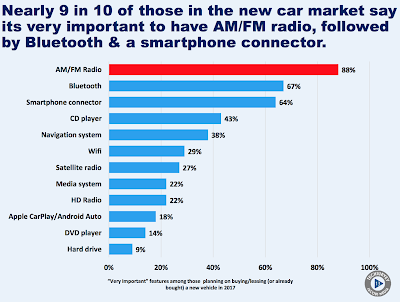 People seem to value broadcast radio in their vehicles.

It seems like local really counts on the road. Both Bluetooth and Smartphone connections continue to grow but they haven’t (yet) caused a serious dip in radio listening. 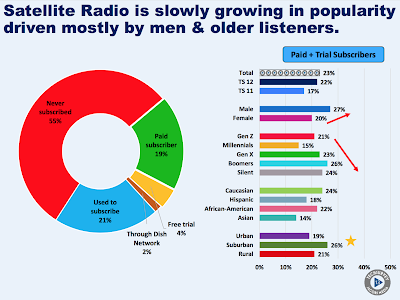 Over the past few years the proportion of Tech Survey respondents who say they subscribe to SiriusXM keeps inching upward.

Previous Tech Surveys have shown that millennial-age folks are the least likely to subscribe.  Jacobs says that much of the new listening to satellite comes from older, male demos.

• THE FAVORITE PLACE FOR “MUSIC DISCOVERY” IS RADIO 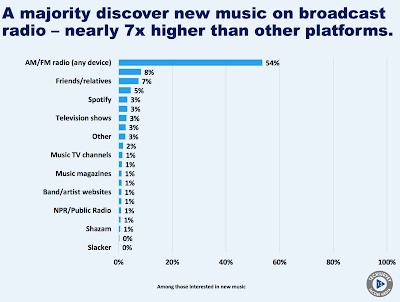 No other platform  even comes close.