Edison Research has released their first Canadian Share of Ear study and it shows that terrestrial radio radio time-spent-listening (TSL) in Canada is more than 16% higher that in America. 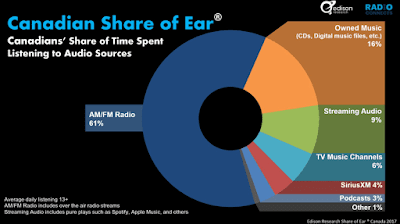 Canada’s Radio Connects, a radio advocacy organization, partnered with Edison Research to conduct the first Share of Ear study north of the border.

The chart on the left shows the Canadian Share of Ear summary.

In Canada AM/FM stations have 61% of the ear-space compared to around 50% in the US. Canadians also consume a bit more Owned Music and somewhat less streaming audio and SiriusXM satellite radio.

The study also found that Canadians spend an average of 4 hours and 14 minutes every day listening to audio from all sources. Canadian TSL is slightly higher than the US TSL.

Noncom’s larger share of Canadian radio listeners is, in part, due to history. When radio began in the 1920s and 1930s, Canada embraced a hybrid system that combined elements from the UK and US. The government-funded Canadian Broadcasting Corporation (CBC) had a mission to bring radio (and late TV) to every corner of Canada as a public service. Commercial stations, often copying American formats, were concentrated in cities.

CBC radio was well funded and hired much of the nation’s best talent.  Many observers (including myself) felt that Canada radio sounded “better” than US radio. By the 1980s, budget shortfalls and more aggressive commercial stations cut the CBC’s share of listening. CBC responded by adding an FM “music and arts” channel that had a handful of listeners.

The CBC’s biggest change was the addition of commercials.  Though only two minutes of commercial content was allowed, the ads compromised the “non commercial” aura of the CBC. Now CBC stations have adopted “the NPR sound,” branding themselves as “public radio.” They even have pledge drives. 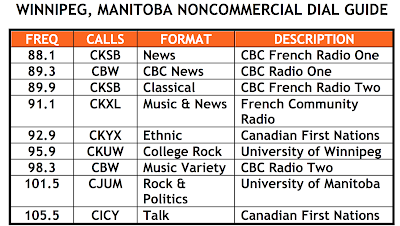 To illustrate the differences and similarities between noncom radio in Canada and the US, I assembled a Noncommercial Dial Guide (on the right) for Winnipeg, Manitoba. The Winnipeg metro has around 750,000 people, a similar size as Omaha. The Winnipeg noncom guide is on the right.

According to Numeris [link], the nonprofit organization that handles Canadian TV and radio ratings, the top station in Winnipeg is News/Talk 89.3 CBW-1, with a 14.5 average-quarter-hour (AQH) share and an estimated 118,600 weekly cumulative listeners. CBW-2, featuring CBC Two’s eclectic music mix lags behind with a 3.6 AQH share and 54,300 weekly cumulative listeners.

French-language CBC News/Talk station CKSB is only other noncom listed in the Numeris ratings.  They had a 0.2 AQH share and weekly cume of 2,900.

CJUM would likely sound familiar to US listeners. The University of Manitoba station’s schedule looks like a mashup of old-school American community radio and a college rock station like Radio K in Minneapolis. CJUM features US programs such as Radiolab, Democracy Now and e-town.