About two years ago Maine Public Broadcasting began building a network of full-time Classical music stations in the major population areas of the state.

The investment is now paying dividends.

According to Nielsen Audio’s Fall 2017 survey, weekly listeners to Maine Public Classical were up 61% from Fall 2016.

Observers credit three factors for the increase: a new station at 96.7 FM (WBQF) was added the Classical network in 2017; Ample promotion that has created awareness of the new service; and, highly focused programming.

The chart on the left shows the estimated weekly listeners in Maine’s three rated markets: Portland, Bangor and Augusta-Waterville. Maine Public Classical increased its weekly listeners by large numbers in all three markets.

Maine Public’s News/Talk stations were also up in Fall 2017 compared to Fall 2016, the time of the Presidential elections.  NPR News/Talk stations nationwide saw record growth in the number of weekly listeners before and during the campaign. Mainer Public News has maintained these gains one year later.

In Portland, the state’s largest market, Maine Public Classical channel increased their estimated weekly listeners by 67% over Fall 2016. New Hampshire Public Radio, which puts a decent signal into Portland lost ground with weekly listeners down by 21% in the past year.

Independent community station WERU also has listeners in Bangor but they do not subscribe to the Nielsen Audio ratings and their data is not published. 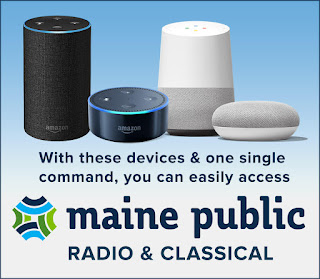 On the right is a sample of ongoing promotion for both Maine channels encouraging listening on Smart Speakers such as “Alexa.” Maine Public Classical makes ample use of syndicated Classical 24 programming. The schedule is focused and free of “speed bumps” that cause tune-out.

Maine Public is currently conducting a capital campaign called Charting a Bold Future. A donor (who did not wish to be named) stepped forward with $100,000 lead gift to facilitate the purchase of 96.7.

While doing research for the post about Maine Public, we came across a very impressive LPFM station in Portland.

The station’s volunteer hosts are curators of various genres of music that are familiar and inviting.  How can you go wrong with programs like The Motown Lunch Hour, Roots: The Beginning (classic blues cuts) and The Gentle Sounds of Supernature (chill & Quiet Storm tracks). Listeners can feel the love in an instant.

WJZP has a real sense of purpose. They describe their mission this way:

It is the philosophy of all of us at WJZP that jazz music, in all of its various forms, is a reflection and celebration of the world’s incredible diversity, and an expression of the human experience. Our goal at WJZP is to be more than just a radio station.  We use our voice as a local non-profit organization to promote the ever-growing artistic and cultural landscape of Portland.

WJZP offers excellent promotion of local artists and events on-air and on the station’s website and Facebook pages. WJSP hosts concerts and gatherings such as a weekly Happy Hour series at Portland House of Music during the summer.

The spark plug of WJZP is Dennis Ross, President and CEO of the stations. Ross is a charismatic individual who moved to Portland from San Diego in the 1990s.  Ross said the reason for the move was to ensure a better quality of life for his son, Dennis Ross, Jr.

Ross and his now college-age son were featured in a recent feature article in the Portland Press Herald about communication between fathers and sons about how to succeed in life [link].