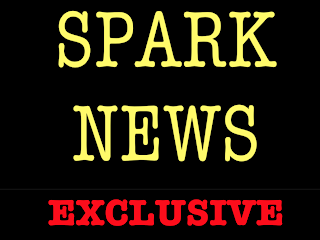 What do heritage commercial News and Talk stations WBAP, KIRO-FM, KOGO and WBT have common? Not so long ago, each was the leading radio news source in their market. According to Nielsen Audio May 2019 PPM ratings, they were replaced in the top spot by a local NPR News/Talk station.

Spark News readers know about the amazing progress NPR News/Talk stations have made in growing their listening and number of listeners in recent years. However, commercial radio operators are just beginning to hear the news.

In mid-June, Inside Radio, discussed the competition commercial news stations [link] in San Francisco and Washington, DC are having with KQED and WAMU:

“In markets like San Francisco and Washington, DC, the biggest battle at the top of the Nielsen ratings ranker isn’t between two big music FMs. It’s a commercial all-news outlet in a neck-and-neck race with a local public radio station."

“Such format fights may still be a rarity in most cities, but a public media initiative could make local NPR stations a lot more competitive in the future.” 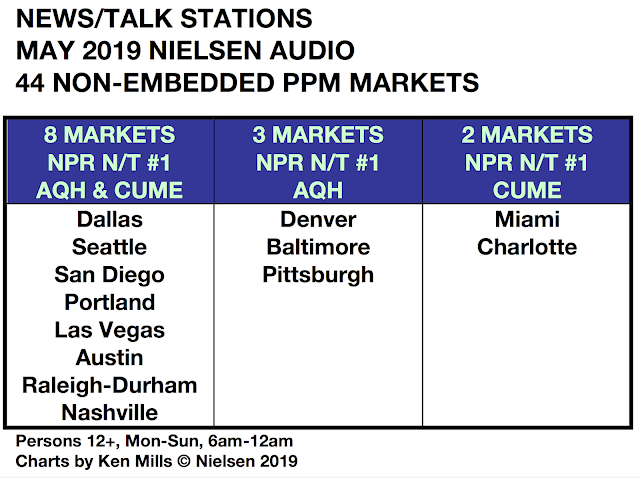 This trend is about more than bragging rights. In most market it represents a change in “the station of record” as commercial news and talk stations abandon a position they have held for many years.

Though iHeartRadio, Cumulus and Entercom had the most stations displaced from number one by a NPR News station, almost all commercial broadcasting groups show the same downward pattern.  Though some commercial stations say their format is “news,” major staffing cuts hurt their ability to compete. 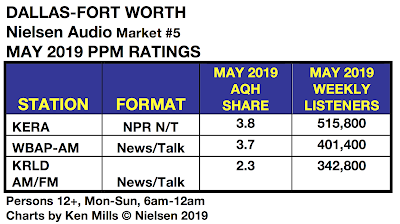 In Dallas-Fort Worth NPR News/Talk KERA continues to pull away from Cumulus’ WBAP and Entercom’s KRLD.

Just three years ago, in the May 2016 PPM ratings, both stations were beating KERA. 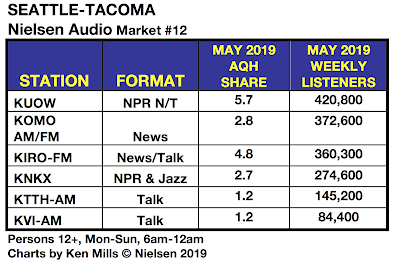 KUOW continues to lead all commercial news and talk competitors, but is hasn’t always been that way.

In May 2016, Bonneville’s KIRO-FM lead KUOW in both metrics. Sinclair’s KOMO had a larger cume than KUOW. 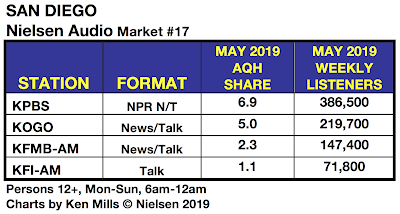 In San Diego, both KOGO and KFMB once lead NPR News/Talk KPBS. 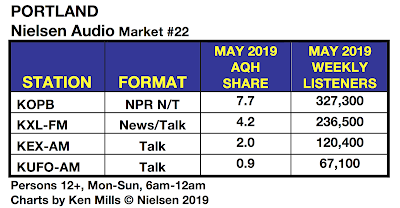 Portland is regarded as one of the best markets in the nation for public radio programming.

Alpha’s KXL-FM and iHeart’s KEX are no match for KOPB.

Entercom and Beasley seem to be making it easy for NPR News/Talk KNPR to be the top radio news source in Las Vegas.

KXMT and KDWN are no longer even competitive with KNPR.

Commercial broadcasters in Austin have abandoned any effort to compete with NPR News/Talk KUT.

One would think there would be a strong commercial news station in such an important state capitol. But, that is not what has happened.

The situation is much the same in Raleigh-Durham.

iHeart’s Talk station WTKK is the only commercial news or talk station that is even in the same league as WUNC. Meanwhile Curtis’ Media WPTF hardly has a pulse in another important state capitol.

For years WSM in Nashville had one of the best newsrooms in the nation. 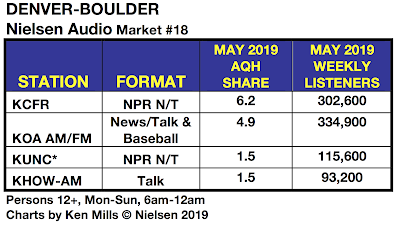 KCFR typically leads KOA in estimated weekly listeners. But in May 2019 broadcasts of the Rockies pushed KOA’s cume over KCFR. 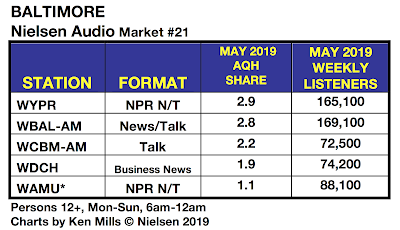 Who could imagine Hearst’s WBAL in Baltimore loosing to a noncom station in AQH share.

But that is exactly what happened in the May 2019 Nielsen PPM ratings when WYPR beat WBAL. Now WYPR trails WBAL by inches in estimated weekly listeners.

My how the mighty are falling.

If the current trend continues WESA will become the header in cume.

We are sure some folks never imagined Entercom’s giant WBT in Charlotte would loose the top news spot to anyone. 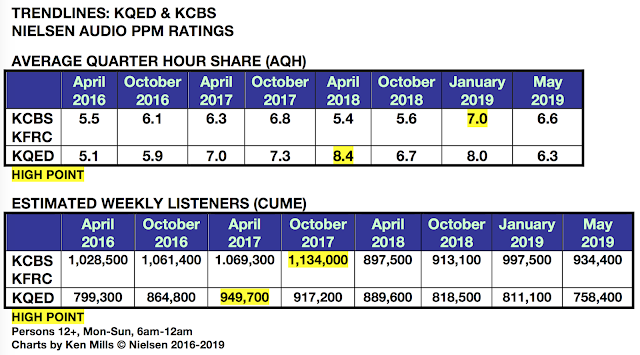 As you can see in the three-years trends for San Francisco, KQED beat KCBS in AQH share many times. But things changed in May 2019 when KCBS had the top AQH share.

In the Twin Cities Entercom's WCCO became the top news station in the market because of the Minnesota Twins’ terrific season. Once the MLB dust has settled and the Twins season ends, look for MPR’s KNOW to be back on top in AQH share and weekly cume.

Just the thought of KMBZ loosing the top news position in Kansas City to NPR News/Talk KCUR probably causes headaches at Entercom’s HQ. But that could happen soon if KCUR keeps growing its audience.

The situation is similar in Columbus where NPR News/Talk WOSU continues to gain on iHeart’s legendary WTVN.