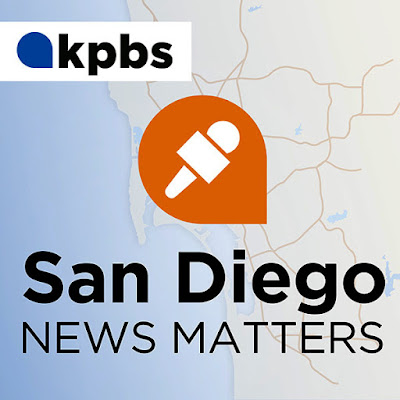 America’s ugly political scene is on full display in San Diego where an altercation about the behavior of President Donald Trump has led to a lawsuit against KPBS, San Diego State University (SDSU) and a KPBS employee.

The suit alleges that the defendants caused harm to Benke because of negligent hiring practices, assault and battery.

The lawsuit stems from an incident that happened on September 6, 2018, at KPBS. On that day, Benke’s father Don Benke, an employee at KPBS, got into a heated argument with SDSU communications professor Peter Anderson. Witness told KNSD that the argument began when Don Benke told Anderson that KPBS should not speak negatively about Trump.

Then Don Benke went home and told his son, Peter Benke, about the incident.

Peter Benke then went to KPBS to defend his father’s honor. He confronted Professor Anderson and another argument began.

After a few minutes of insults, a fight broke out between Peter Benke and Kevin Shrader, KPBS Senior Engineering Manager. Shrader was in the room had heard the argument.
SDSU campus police arrived and cited both men for battery. No criminal charges were filed.

On October 1, 2018, Shrader filed for a restraining order against the Benke family, including judge Patricia Benke. In the filing Shrader said he feared for his safety after the incident.

According to a story published just after the incident in the San Diego Union Tribune [link] Schrader said in his restraining order petition:

“This person [Peter Benke] attacked me and I want to protect my family. He is the son of a coworker who attacked me at work.”

Last week Benke filed a civil lawsuit, alleging several employees at KPBS assaulted him. KNSD reported that in the lawsuit Peter Benke admitted to going to KPBS to speak with his father’s co-workers. The lawsuit said that Benke’s reason for going to KPBS was to give KPBS employees “a history lesson.”

Benke’s suit said that Shrader walked towards him and Benke spat at Shrader. Then Benke alleges that Shrader became enraged and forcibly struck Benke with both hands on his upper chest.

The fight continued at the gate outside KPBS. Benke alleges that Shrader and another KPBS employee assaulted him by putting Benke in a headlock. Benke said that he was forced to the sidewalk and he hit his head on the concrete surface. 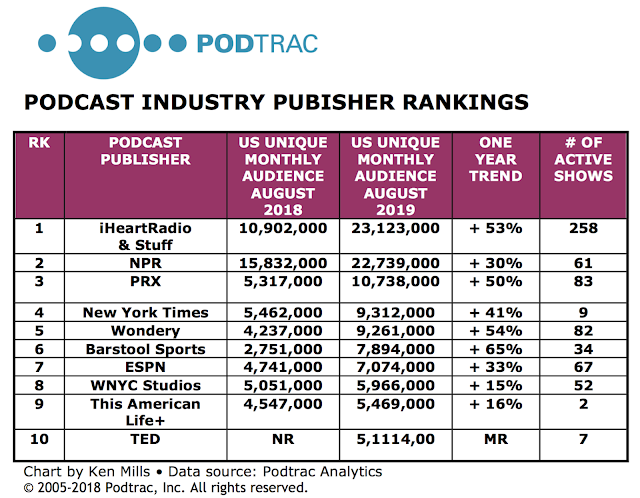 According to Podtrac Analytics, iHeartRadio replaced NPR as the top podcast publisher in their August rankings.

iHeart celebrated with a rush of press releases declaring We Are Number One. iHeart has been working for this moment since they acquired the Stuff cluster of podcasts in 2018.

At the time, the addition of Stuff doubled iHeart’s Monthly Audience instantly.

Cynics say that iHeart became number one the old fashioned way: They bought it.  But iHeart is just one of several for-profit companies that are changing the pecking order in the podcasting biz.

Compared to Podtrac’s estimates in August, 2018, all of the podcast publishers are doing very, very well. Another for-profit company, Barstool Sports, had the biggest one-year gain, up 65%.

Noncommercial, public radio publishers also are seeing substantial growth. NPR was up 53% compared to August. 2018. PRX was up 50% during the same period.