Margaret Low has been named the CEO and General Manager of WBUR, Boston.

She brings great storytelling, a steady hand on the wheel and a deep firsthand knowledge of NPR to her new gig.

She left NPR in 2014 to and became President of AtlanticLIVE [link] and Senior VP of The Atlantic.

At The Atlantic she oversaw the organization's Events Division. It has staged over 100 editorial gatherings in the U.S. and internationally.

Low started at NPR as a producer for All Things Considered in 1989. When she left 25 years later, she was NPR’s Senior VP for News

She follows WBUR's MVP Sam Fleming who served as interim GM. Fleming returns to being Managing Director of News and Programming. He praised Low in the announcement press release:

“I collaborated with Margaret for many years when she was at NPR and was always impressed with her intelligence, warmth, and extraordinary communication skills.”

“In fact, Margaret was instrumental in forging WBUR’s unique editorial partnership with NPR and Here & Now in 2013.  Margaret understands the heart and soul of what makes public radio special. She’ll be a powerful force to lead us as we continue to evolve in the new media landscape.”

KEN SAYS: This news made our day.

The hire is a brilliant choice by WBUR.

We first met Margaret back in the 1990s when she worked Bill Buzenberg and John Dinges. While she was at NPR, Low worked with programmers Jay Kernis and Eric Nuzum.

THE STATE OF NONCOM RADIO IN BOSTON

Boston is a great place to work in public media. The fans, members and community benefit most. To help Low get up to date, here is a look at the market today: 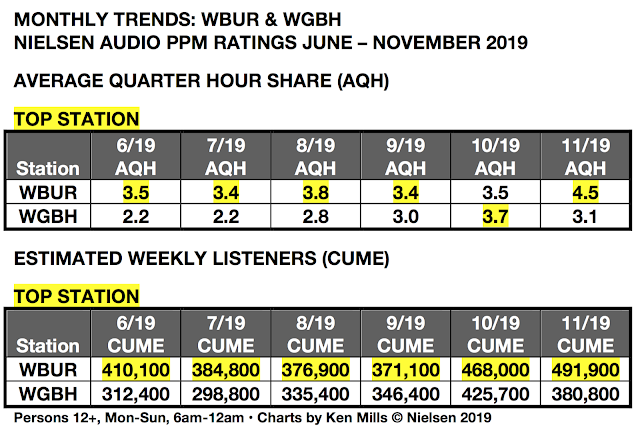 The competition between WBUR continues to be fierce.

Check out the fast changes from October to November.

Maybe the dog ran away with the PPM meter.

Both of stations are well programmed during key day-parts when the most people hear radio. 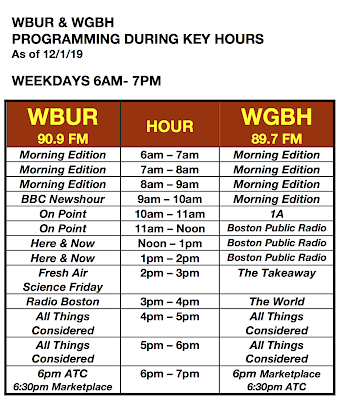 According to common wisdom,WGBH is more “local.”

We don’t know if this is really true.

Look at what the two stations do at 3pm on weekdays. WBUR local and WGBH plays The World.

WBUR’s is getting closer to news giant WBZ, according to Nielsen Audio. In the November PPM ratings WBZ had a 4.8 AQH share and 556,300 estimated weekly listeners. 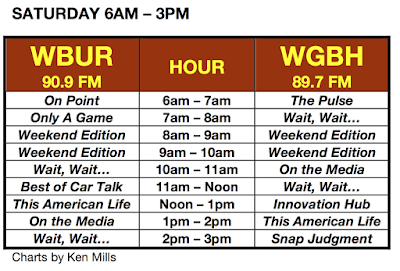 On Saturday, the hits just keep on coming! 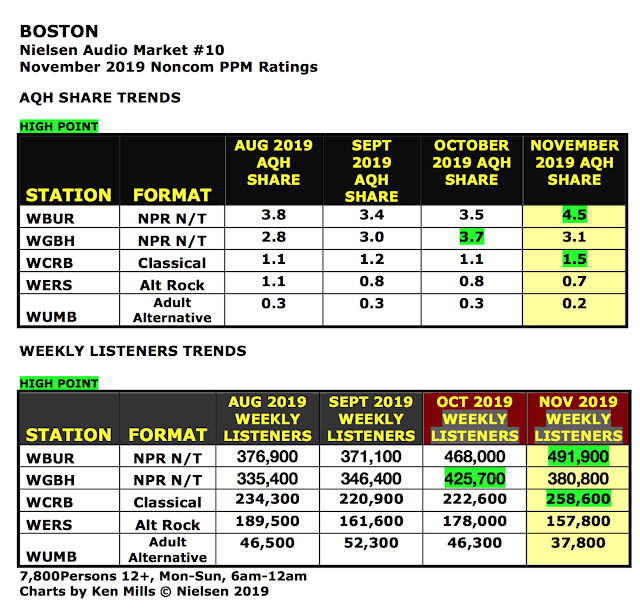 Also in Boston, Classical WCRB is making gains in both AQH share and estimated weekly listeners.