Prior to that, Kate served as an NPR Bureau Chief in the west.

She will receive the honored in person during a “virtual ceremony” on Thursday, June 25th at 8pm ET.

Also during the ceremony, Maria Hinojosa will receive the Leo C. Lee Award – a recognition of lifetime achievement.

"Kate isn't the type to spend her time cultivating followers on Twitter or working the ropes of our editorial trade groups, but behind the scenes, she has quietly made an enormous mark on our public media industry and richly deserves this honor." 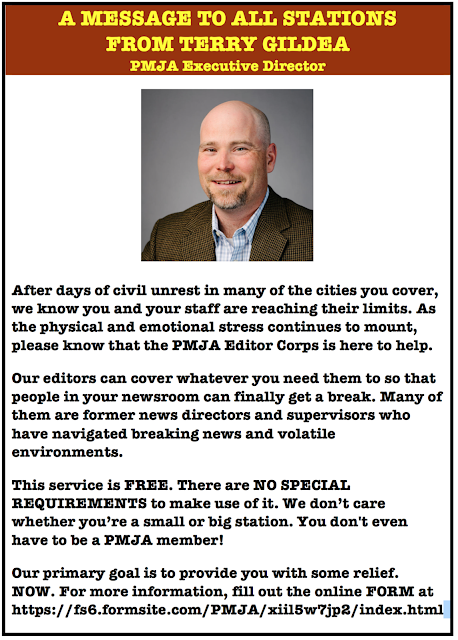 Things are busy at PMJA these days.

The organization is offering to provide temporary news pros to stations who need extra help.

On the right is a message from Terry Gildea, Executive Director of PMJA explaining the process.

Also, PMJA will be holding annual elections - through entirely electronic means for the first time - on June 24 & 25.
Nominations are now open for three board seats.
For details about the election process and to make nominations contact PMJA Business Manager Christine Paige Diers at christine@pmja.org

Yesterday we looked at May 2020 PPM ratings for NPR News/Talk stations in the top four radio markets and concluded that there is no clear pattern in the results. We said that differences from market to market are similar to the checkerboard “reopening” for business while deaths from Covid-19 have passed 112,000.

The same is true for Classical and AAA music stations. The common wisdom is that during times like these people either want news or they want to escape to a music source.

According Nielsen’s May numbers, AQH shares for news/talk stations are dropping. Some Classical and AAA have made big gains in AQH share, but not all stations experiencing the big escape surge.

Don’t even ask about estimated weekly listeners. In the new “temporary normal” that we are in the middle of now, most stations have seen their number of weekly listeners cut in half. 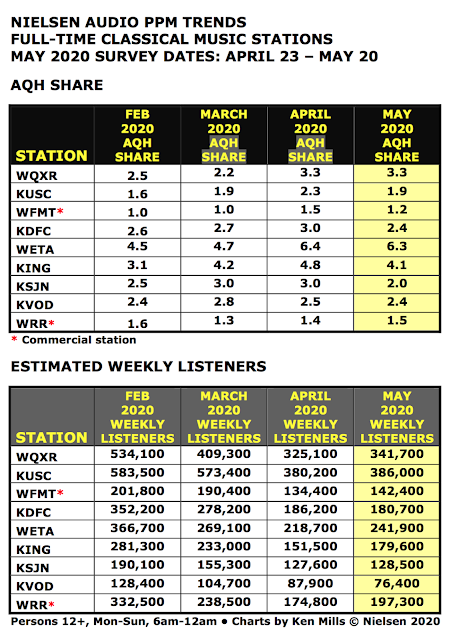 Spark News looked at nine full-time Classical music stations in top 20 markets and found that all nine had a decrease in their AQH share from April.

Compared to February – the last month when things were sort of normal – five of the nine Classical stations have increased their AQH share.

Three were down and one remained the same.

Eight of the nine stations had more estimated weekly listeners in May than they had in April.

But, none of the stations increased their weekly listeners compared to February. 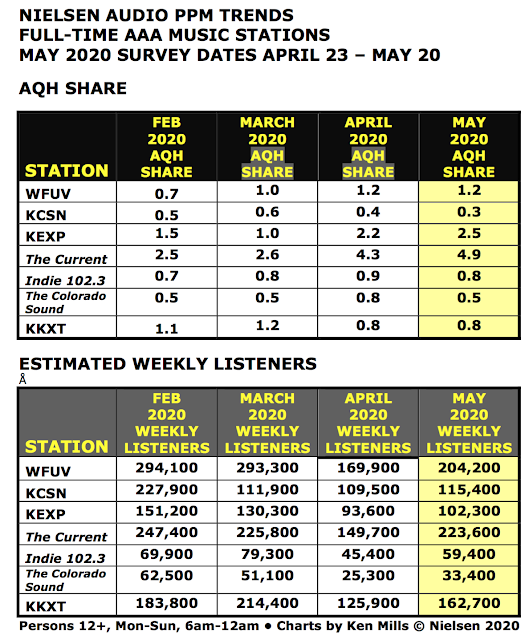 The May book was also a mixed bag for seven AAA music stations in top 20 markets.

We wish we could say that all stations are doing as well as 89.3 The Current.

Their performance during the Covid-19 pandemic is not nothing short of miraculous.

Not only has their AQH share gone up each month since February. In May The Current’s estimated weekly listeners edged close more normal times.