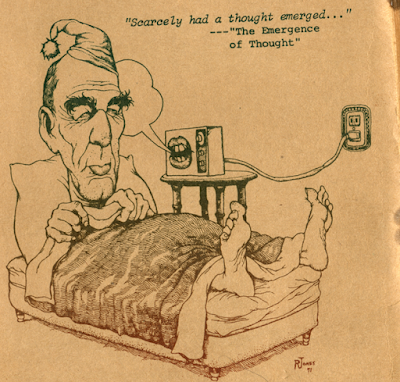 
[Image from SEX AND BROADCASTING]

Last Friday, in response to a reader question about KUSP’s current financial and governance struggles [LINK], that I had never heard of a legal requirement to let volunteers and paid staff vote on major station decisions.  Now I know better.

A reader who knows KUSP’s history directed me to the online Pataphysical Broadcasting Foundation’s bylaws, the owner of KUSP [LINK].  Sure enough volunteers, staff and even “honorary members” have the right approve or deny major changes at the station:

Section1. Membership. The membership of the Foundation shall consist of all volunteers and staff and honorary members of any radio station operated by the Foundation.

Section 7. Voting. Each member shall have one vote, not exercisable by proxy. Absentee ballots can be obtained until close of business (5:00 P.M.) before any meeting of the Foundation. The Board may direct the staff to conduct an electronic vote if agreement of the Foundation membership is required.

It is not clear when the need for agreement of the Foundation membership kicks in but it appears to be whenever someone wants it to kick in.  Under California law, the bylaws determine the rules of the road.

KUSP is an instructive case study about what is wrong with community radio.

There are several competing versions of the story, so it is best to stick with the facts:

• KUSP was started by the Pataphysical Broadcasting Foundation, a 501c3 charity set up to create the station.  KUSP signed on in 1972.

• The first manager of KUSP was David Freedman, who now runs WWOZ, New Orleans.  Milam claims the choice of Freedman was his idea:

David Freedman - always a crabby sort - was perfect for me to send off to birth KUSP. His seeing me as such a sly villain gave a certain pith to his work, so we were able to get the very urgent best out of him.

• Since 1972 KUSP has aired the major NPR News programs, Pacifica favorites such as Democracy Now and a variety of local music and opinion programs.

• KUSP has accumulated a debt that now is over $700,000, bringing the Foundation/station to the verge of bankruptcy.

• Recently, Pubic Media Company [previously Public Media Capital] and Classical Public Radio Network (“CPRN” – the owners of classical powerhouses KUSC and KDFC) made an offer to buy KUSP.  News accounts say CPRN is offering a million dollars for the license.  Per KUSP GM Terry Green, KUSP members voted to hear more about the CPRN deal.  At this time, there is no decision about selling KUSP;s license to CPRN.

Lorenzo Milam has been called the Johnny Appleseed of Community Radio because his writing and actions inspired dozens, maybe hundreds, of independent community stations. His 1972 book, Sex and Broadcasting, provided a primer about how to file with the FCC for a new noncommercial FM license.  At the time there were many unclaimed frequencies.  Milam was at the right place at the right time. 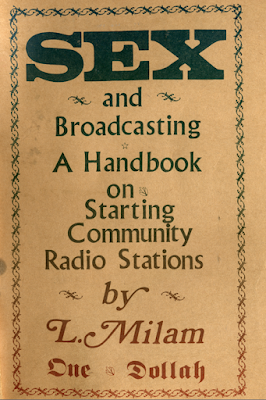 [I wrote in March [LINK] about when I purchased my copy of Sex and Broadcasting at a headshop.  It was on a shelf next to High Times near the bongs.]

Milam walked the walk.  He worked at Pacifica’s KPFA and founded KRAB-FM in Seattle in 1962. He also played a role in the founding of KBOO in Portland, KDNA in St. Louis, WYEP in Pittsburgh and many more.

Sex and Broadcasting has become a bible of sorts for community stations.  Many still have a copy on the manager’s desk next to the FCC Rules. One of Milam’s legacies is what I call The Pacifica Method of governance and programming.  Sex and Broadcasting, in part, led to community radio’s obsession with committees.  They are still are the SOP.

THE LEGACY OF LORENZO MILAM

Milam was a visionary who exceled in concepts and theories.  But, he was NOT good at running things.  Folks say he has poor people skills.

Milam is now in his mid 80s.  He is still a prolific writer and operates a blog known as RALPH [LINK], a place where he talks about the many things on his mind.  It is like a combination of Hunter S. Thompson and Grumpy Old Men.  If you are going on a trip, you probably wouldn’t choose Milam to drive the car or be The Captain [old hippie phrase for the guru of acid trips.]

IN THE WORDS OF CHAIRMAN MILAM

The quotes below are from Sex and Broadcasting and writings by “Joseph Trotsky Milam” at [LINK]. 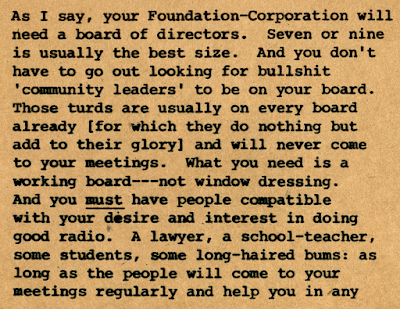 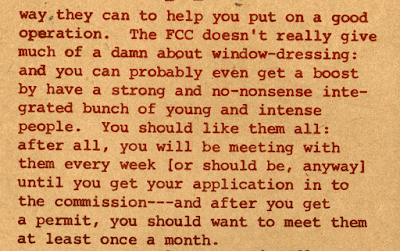 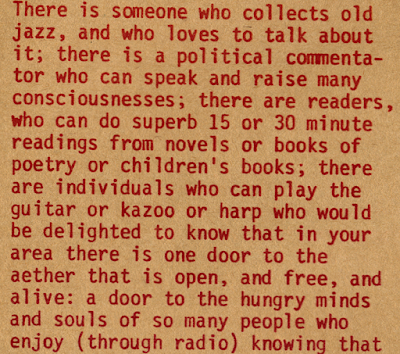 • THE FOUNDING OF KUSP

[The founders and] I were so devious, we made sure that everyone thought the new station was THEIR idea. This gave each community station a hundred mothers, and no step-fathers.

[KUSP is] the sound of this life around us, in and around Santa Cruz, whatever is joyous, creative, dramatic -- that we want to find with our microphone, and by means of RadioMagick, send back to you, amplified and intense.  The sound of dulcimers, flutes, bagpipes, guitars -- electric and acoustic, horns, violins, tom-toms... the sound of our musicians. ALL our musicians: rock, classic, folk, blues, jazz, bluegrass.

MY ADVICE TO COMMUNITY RADIO

In the words of Woodstock emcee Chip Monk: Don't take the brown acid.

Lorenzo probably brewed it.
Posted by Ken Mills Agency, LLC at 1:00 AM