The pixels were almost dry on our report [link] from Wednesday (4/12) praising Bill Crosier, the interim director of the Pacifica Foundation, for bringing business reality back to the beleaguered organization.

Then Crosier’s plan ran into trouble at KPFA.

On March 30th, Crosier released the Pacifica Financial Recovery and Stabilization Plan, part of a past-due report he had made  to the California Registry of Charitable Trusts [link].

Then last week members of the Board of KPFA, Berkeley, say they are creating a new 501c3 organization called Big Tent Radio to acquire Pacifica's assets, or at least those of station KPFA. According to several reports, representatives of Big Tent have contacted celebrities and prominent supporters of progressive causes, claiming that Pacifica is “collapsing”, and asking them to be on the board of their new organization.

In a memo on Friday (4/10) to employees of all five Pacifica-owned stations, Crosier said, in part:

“As commercial media interests dominate our society and non-corporate journalism and culture struggle for survival, Pacifica, like most independent media networks, is facing financial, organizational, and technological challenges.

We are working to improve Pacifica's finances, and we are making progress. Major donors are approaching us, asking how they can help. It is certainly not correct to say that Pacifica is “collapsing”. In fact, that is very misleading. We are actually improving our financial stability.

KEN SAYS: I hope Crosier’s plan prevails. Turning Pacifica around is heavy lift because its reputation has been toxically tarnished by the endless infighting. Like past internal battles, KPFA’s secession effort is not about better programming or broadcasting in the public interest. It is all about political agendas, egos and the mistaken notion that Pacifica needs be destroyed in order to save it.

“If a Serial episode was a mountain peak, then S-Town was the Himalayas.” - Andrew Kuklewicz, PRX chief technology officer

NiemanLab reports [link] that PRX chief technology officer Andrew Kuklewicz shared data about the launch of S-Town on Medium that demonstrates the impact of releasing all of series’ episodes at one time. 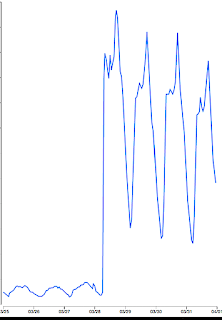 The chart of the right is a display of downloads of S-Town during the week it was launched.

The “mountains” you see show the instant interest in S-Town.

Even though S-Town was only on the market for three days in March, it zoomed to #4 on Podtrac’s March Rankings.

March was a banner month for Ira Glass and company, the folks also behind This American Life (TAL) and Serial. Podtrac releases two charts per month (the March chart is on the left), one that tracks the performance of podcast publishers and the other that lists individual podcasts.

Both charts are generated by Podtrac’s proprietary analytics and are based on their US Unique Monthly Audience. The publisher chart contains specific metrics but, strangely, the podcast chart contains no statistical information.

This is sort of like publishing the standings for a baseball league and not listing how many games each team has won and lost. Without the stats, what is actual difference between #1 and #6?

If Podtrac wants their charts to be an industry standard, they need to show us the data.

As in previous months, the top 20 podcasts is dominated by producers with ties to public radio. Seventy percent of the podcasts on the chart originate from public media shops.