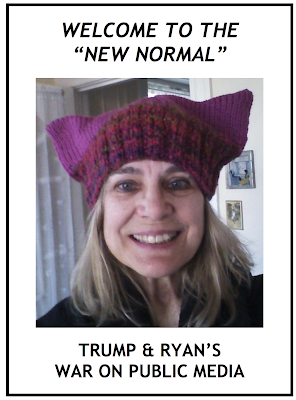 If you haven’t already seen it, I urge you to download Blueprint for Balance: A Federal Budget for 2017, available at [link]. The Heritage Foundation white paper is reportedly the game plan for draconian cuts in federal funding. Among the programs being proposed for cuts are CPB, NEA and NEH.

The 180-page list reads like the “greatest hits” of right-wingers for the past twenty years. However, this time things are different regarding CPB.  Past efforts to eliminate federal funding for CPB failed, in part, because they were “free standing.” Issues. The new version is tied to a larger narrative: These programs are no longer essential to life in America.

Keep in mind that the Heritage plan is a bargaining position and not everything scheduled for demolition will be demolished. Some agencies and projects will be traded for others. Our legislators will be faced with Sophies’ Choice dilemmas:

Choices will need to be made. Will CPB be traded away as part of a grand bargaining package? Stay tuned because things are moving quickly in DC.

SIGN OF THE TIMES: U OF VIRGINIA SELLS WUVA-FM TO ENDOW DIGITAL NEWS PLATFORM

On Tuesday (1/17) the University of Virginia announced it is selling WUVA-FM, Charlottesville, and is investing the proceeds in the online platform WUVANews.com [link]. The buyer of 92.7 FM is commercial broadcaster Saga Communications.  The sale amount was not announced. Saga immediately put a Country music format on 92.7 via a LMA while awaiting FCC approval of the sale.

The licensee is WUVA, Inc., a corporation owned and operated by University of Virginia students. WUVA began broadcasting on carrier-current AM in 1947 and acquired the commercial frequency 92.7 FM in 1978. WUVA, Inc. also owns WUVANews.com, a video and print news service that serves the University and Charlottesville communities. It was launched in 2011.

Kailey Leinz, the University student in charge of WUVA, said in a press release:

“It certainly is bittersweet to transition out of FM radio.  But on behalf of WUVA’s student leadership, I’m very excited to focus on completing our transition to a digital-first news organization with expanded production capabilities – and now with an endowment to support our future. We will remain a strong, independent editorial voice at the University of Virginia.”

KEN SAYS: This sale is unique because WVGU-FM has a commercial license, which is worth much more than a noncom license. Though it is sad to see is the UVA will no longer have a broadcast station in their media portfolio, I agree with the logic behind UVA’s decision. 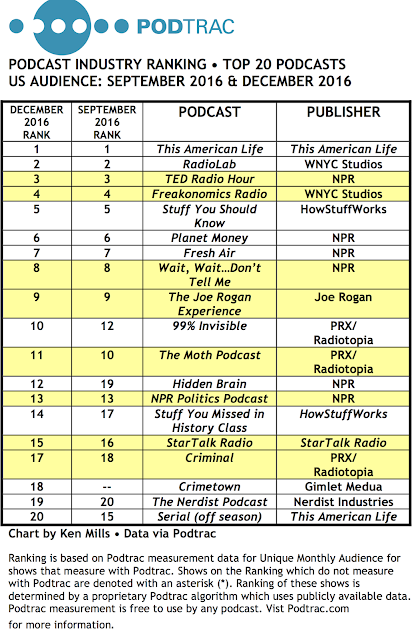 The top nine podcasts remained in the same order as September. The newest entry on the chart was Crimetown from Gimlet Media.