One of the nation’s last commercial Classical music stations, KHFM, Albuquerque/Santa Fe, is about to become a noncommercial station.

The move is part of a larger reorganization of local stations prompted by commercial owner American General Media.

When American General purchased four local stations recently, they were required to divest ownership of some of their existing stations to be in compliance with FCC ownership limits. American General is donating KHFM to the American General Media Foundation, a nonprofit organization doing business as KHFM Community Partners. The station will switch to noncommercial status when the FCC approves the license transfer.

KHFM will be staying in the “family” because the American General Media Foundation is controlled Rogers Brandon, the CEO of American General. According to the foundation’s 2015 IRS 990 tax filing, it has been operating as the fiduciary for KHFM’s public events.

KHFM is licensed to Santa Fe but it puts a strong signal into the Albuquerque metro (the coverage map is on the right).  The call letters KHFM have been used in market since 1954.  KHFM moved to its current frequency – 95.5 FM – in 2001. KHFM has not recently subscribed to Nielsen Audio ratings.  Based on past performance, it is thought KHFM has between 40,000 and 50,000 weekly cumulative listeners.

The change to noncom by KHFM leaves two remaining major commercial Classical music stations: WFMT in Chicago and WRR in Dallas.  Both are owned by noncommercial entities.

Last month we wondered out loud if KNKX (formerly KPLU) had lost its independence mojo.  The May Nielsen Audio ratings show KNKX's mojo is indeed rising. Compared to April, KNKX’s estimated weekly listeners were up over 12%. 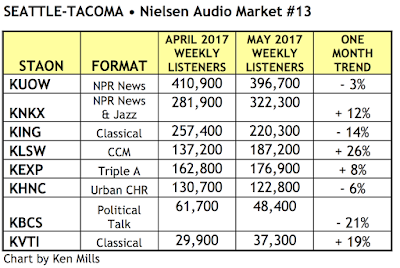 Also in “Sea Tac” Triple A KEXP was up 8% from April. Classical KING lost 14% of its estimated weekly listeners.

It is unknown if these classical listeners move to Northwest Public Radio’s repeater KVTI.

In the Dallas-Fort Worth metroplex NPR News station KERA saw considerable erosion of its estimated weekly listeners.  In fact, all of the noncoms in the market except Triple A KKXT, lost weekly listeners. 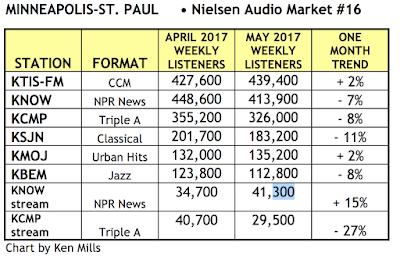 Most noncom stations in the Twin Cities also saw declines in weekly listeners from April to May. All three American Public Media (APM) stations – KNOW, 89.3 The Current and KSJN lost listeners.

WHYY, Philadelphia had a big gain in estimated weekly listeners, up over 40,000 (10%) from April. 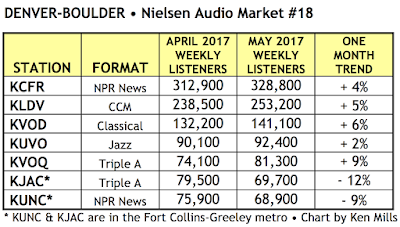 Estimated weekly listeners were up at all three Colorado Public Radio (CPR) stations. CPR’s OpenAir Triple A station KVOQ was up for the fourth straight book.