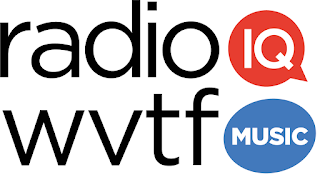 For over twenty years WVTF, Roanoke has been a regional powerhouse with two mini-networks of stations mixing news/talk, Classical, Jazz and Bluegrass. But both had evolved into a hodge-podge program styles. As of July 10, 2017, WVTF will bring clarity and consistency to both services.

On that day WVTF will debut 24/7 news/talk on Radio IQ and mainly Classical music on WVTF Music. WVTF Music will have Classical from 12am to 8pm weekdays and Jazz at night. On weekends WVTF Music will air Bluegrass, Americana and A Prairie Home Companion.

The changes will be most noticed by listeners in the Roanoke metro. WVTF’s biggest “stick” – 89.1 FM – will become the flagship for Radio IQ. Classical music in Roanoke will move to 89.5 FM on translator W208BX via WVTF-HD2. The maps below show the new coverage for both stations in Roanoke. 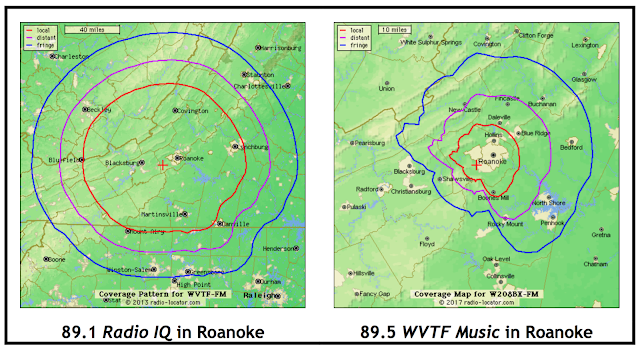 The two mini-networks will also swap frequencies in other markets across Virginia. The map below shows the entire Radio IQ and WVTF Music coverage areas as of July 10th. 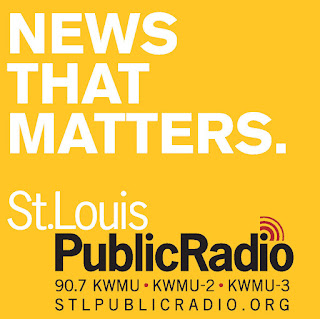 St. Louis Public Radio will roll into Rolla, Missouri on July 1st via a Local Management Agreement (LMA) with the licensee of KMST 88.5 FM.

KMST has been operating as a mixed format station for more than two decades. Under the LMA agreement, KMST will rebroadcast KWMU’s current program schedule.

The new arrangement highlights the difficulty of running a full-service public radio station in a small, somewhat isolated area.

According to financial disclosure statements, KMST in 2015 had operating revenue of $402,000 and expenses of $477,000. KMST’s licensee, Missouri University of Science and Technology, had to pick up the deficit. The deal will take the University off the hook for KMST’s operations.

St. Louis Public Radio is a much, much bigger business with 2016 revenue of $6.8 million. They also simulcasts KWMU’s programming on WQUB in Quincy, Illinois, located 125 miles north of St. Louis.

Rolla is a small city with a population of 25,000, located approximately 100 miles southwest of St. Louis. Tim Eby, GM of St. Louis Public Radio, said the LMA will assure the survival of public radio in Rolla:

“Public radio is a vitally important asset to the many communities it serves, so it is important to us to ensure that KMST will continue serving the Rolla area.”

104.3 THE CURRENT SPREADS THE LOVE IN DULUTH 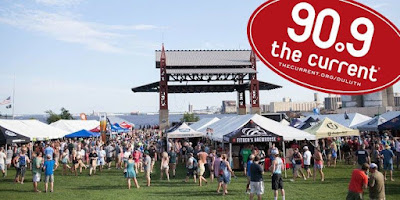 Recently MPR upgraded coverage by moving to 104.3 FM KZIO.  They purchased the former commercial rock station earlier in 2017, replacing a translator at 90.9 FM.

The Current debuted almost a year and a half ago on 90.9 FM. Most of the programming is a simulcast of 89.3 The Current from St. Paul.  But, increasing amounts of programming now originates in Duluth.

Now that The Current has made the transition to 104.3 they are throwing a two-day listener appreciation party on July 28th and 29th in the heart of downtown Duluth.  Complete information of the bash is here. Names of performing artists will be released soon.

Duluth-Superior has long been known as a hipster town with a vibrant local music scene. It has a different, bigger vibe than any other city in the Midwest because it is an international seaport. During the “warm season” – roughly May through September – the Twin Ports come alive with street fairs, festivals and other celebrations.