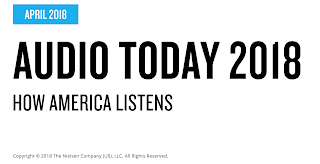 According to new research by Nielsen, podcasting is the fastest growing platform in our multi-channel world. Audio Today 2018 – How America Listens [link] shows usage of various devices and platforms by Americans age 18 and older. The April 2018 report has good news and bad news for both traditional and digital media. 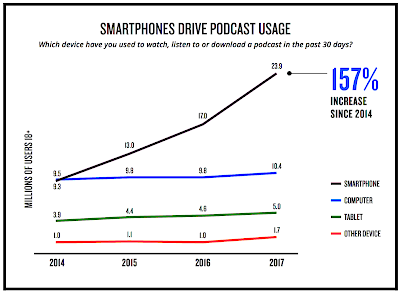 The popularity of podcasts stems from a perfect combination of mobile technology and very appealing content. Nielsen says that the proliferation of Smartphones is making listening to podcasts easy and convenient.

Content created by producers working with This American Life, NPR, PRX, WNYC Studios and others has made some shows “must haves.” Media hype has pushed podcasts to the forefront, even though only 23% of Americans (roughly 30 million people) use them during a typical week. 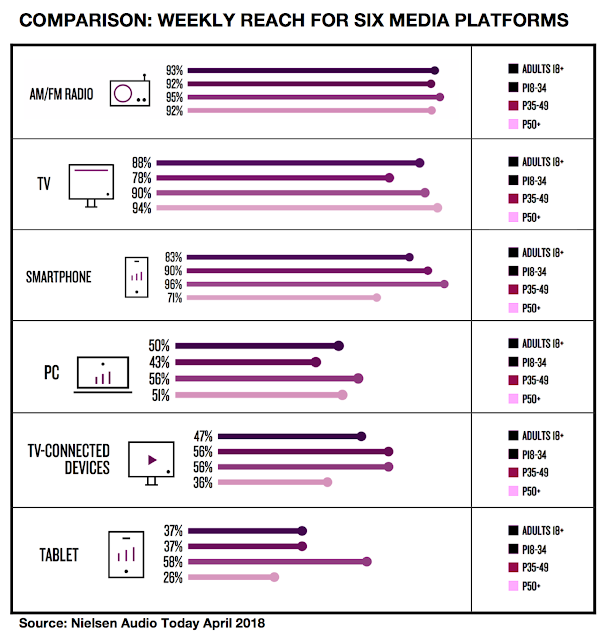 On the left is Nielsen’s comparison of the usage of the top six audio/videp delivery systems. Traditional AM/FM radio still has the largest national reach.  Nielsen estimates that 93% of people 18 and older are “exposed” to radio.

“Exposed” is key word.  Nielsen’s PPM methodology is based on survey participants wearing devices that detect embedded codes within radio signals.  However, the PPM meter can’t tell if the respondent intended to listen to a particular station or whether it was accidental.

A person might think they never listen to radio, but according to Nielsen, they probably do. Think about it the next time you go into a store where a radio is playing in the background. The PPM meter picks up the code from that station even though you aren’t paying attention to it.  We’ve never seem an estimate of “ambient listening” versus “purposeful listening,” so radio’s usage might be exaggerated.

Usage of broadcast television during a typical week is declining much faster than listening to radio, particularly for respondents between 18 and 34.

According to Global Market Intelligence, radio mergers and acquisitions of radio station licenses during the first quarter of 2018 was the lowest in almost four years.

The most active buyers were commercial broadcaster Hubbard Radio and noncommercial mega-owner Educational Media Foundation (EMF). The top deal during the quarter was EMF’s purchase of Chicago’s WLUP-FM for $21.5 million. 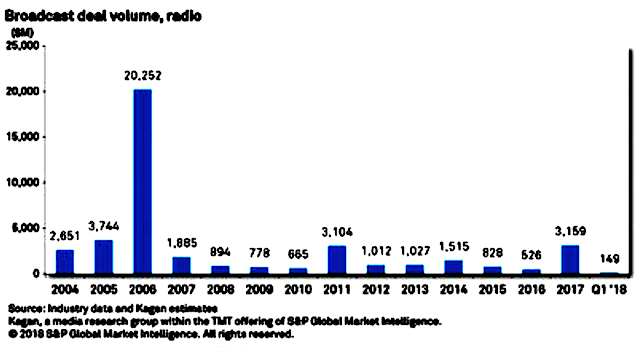 Station sales have lagged since 2006. As shown in the chart on the left, there was a sharp drop in the number and amount of station sales during the 2007 – 2009 great recession. The big reason for the decline is reaction to hyper consolidation in the late 1990s and early 2000s.

Clear Channel (now iHeartMedia), Cumulus Media and a few other companies acquired hundreds of stations during this time by borrowing lots of money, something they regret today. The intense buying and borrowing was what former Radio Advertising Bureau (RAB) President Gary Fries used to call “the greater fool theory.” In other words, it didn’t matter how much was paid because there is “a greater fool” ready to buy he station for even more money.

This theory was popular back in the days when prices for broadcast licenses continued to rise.  Things have changed in 2018 because the demand for stations is low, causing prices to drop.

As we have reported recently, if iHeart and Cumulus aren’t successful in Chapter 11 bankruptcy, either or both companies ,might forced into Chapter 7 liquidation. This could cause a glut of licenses for sale and prices will fall even more. This could be an opportunity for noncommercial broadcasts to acquire more signals. Or, perhaps EMF will buy them all. (just kidding) 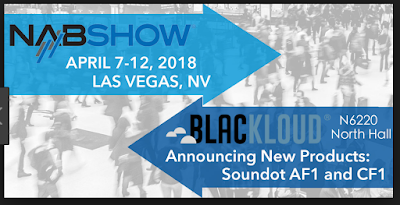 Even though FM chips are not activated in most mobile phones, a new headset from Blackloud [link] can play FM signals.

The Blackloud sets contain their own FM tuner chips. The new Headset made its debut at the recent NAB Show in Las Vegas.

The Blackloud Sounddot AF 1 headsets offer users free FM access whether or not their phones have tuner chips. The AF 1 also does not need to be connected to the Internet to play FM programming.

Blackloud Sounddot AF 1 headsets are designed to work iPhones and iPads. Its cousin, the Sounddot CF 1works with Android devices. The retail cost is around $60.00 per unit.  If they work as well as the manufacturer say they will, these headsets might be a good pledge drive premium.