WILL NEW MANAGEMENT CHANGE THE SLEEPY CULTURE AT AT KALW?

One of the most anticipated job searches in public radio may be completed soon when if/when a new GM is hired at KALW, San Francisco [link]. i

The reason we say “if” is because the process has taken quite awhile despite the size of the candidate pool.

The opening became widely known when KALW purchased a “help wanted” ad [link] written by still-current GM Matt Martin.  The title of Martin’s essay was Take My Job - Please!
Martin’s personal pitch was notable because he was unusually candid in his description of his job and why he had chosen to leave a place where he likes to work:

“I will start with this: Being General Manager of KALW is a big job. It’s challenging. It takes guts. For more than a decade, I’ve had a great time doing it.”

“I do believe there is huge potential and important work to be done at KALW, and I am confident there is someone who can embrace the work and help the station take its next step forward in a way I simply can’t.”

“We are licensed to the San Francisco Unified School District. Understandably, the school board is limited in the attention it can give KALW. So job #1 for the next leader of KALW will be to launch a 501(c)(3) “Friends” group. Not having made it happen is my greatest regret.”

When asked by Spark News whether the job was still open, Martin replied with a very short email message:

Not yet, but we are getting close!

So, the situation now is as clear as mud.

THE OPPORTUNITY VS. THE REALITY ON THE GROUND

Martin understates both the opportunity and reasons KALW lags far behind other stations in similar situations. KALW is a small station in a big market with total revenue in FY 2016 of $2.496 million. Members and underwriters provided 71% of the revenue, a sign of a very healthy station. CPB funds make up only 5% of the annual revenue.  The School District provides in-kind support.

By contrast, crosstown KQED FM & TV report of $70 million in revenue during the same year. 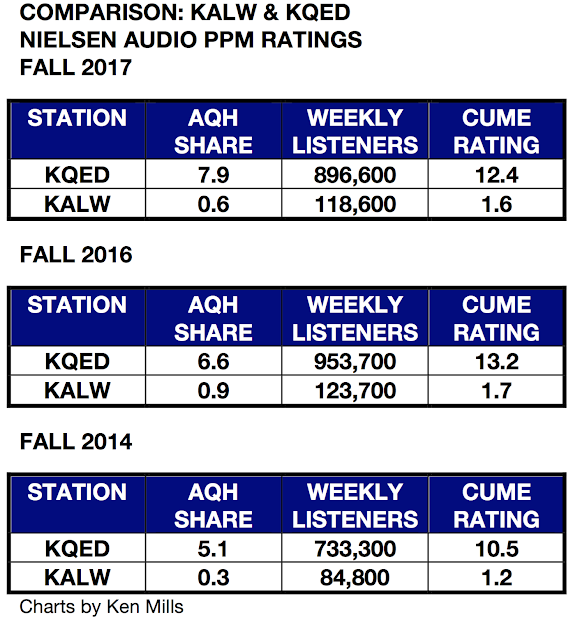 KALW’s ratings are unusually small compared to other stations in the market, particularly KQED. On the left is a chart the compares the Nielsen ratings performance of both KALW and KQED from IN Fall 2014, 2016 and 2017 in three key metrics.

KQED often has the largest number of estimated weekly listeners of any NPR News/Talk station in the country.  KQED’s Cume Rating, a measure of market penetration, was an amazing 12.4% in Fall 2017. I call this metric “the community importance factor."  KQED is a very, very important factor in San Francisco.

KALW is a much less of an important factor. Their cume rating of 1.6 shows that KALW is “forgettable media” to most of the people in the Bay area. Both stations have huge coverage areas, so that is not the problem.

To me, KALW’s insignificance is due the fact that the people there now like it this way,

There are very talented folks working at KALW but the station – as a whole – seems to be locked in a sleepy status quo. Changing this corporate culture will be a big challenge for the new GM because it is deeply ingrained at KALW.

Yes, there are substantial opportunities for KALW. Hypothetically, KALW could compete with KQED the way WGBH has challenging WBUR. Dual formats are another possibility -- look at the success KCRW has in Los Angeles and KNKX has in Seattle.

Moving forward, will KALW continue the sleepy status quo or will it find the guts to be great.